The Swedish Malaise Trap Project (SMTP) was launched in 2003 with the aim of making a complete list of the insect diversity of Sweden. Over the past fifteen years, an estimated total of 20 million insects, collected during the project, have been processed for scientific study. Recently, the team behind this effort published the resulting inventory in the open-access journal Biodiversity Data Journal. In their paper, they also document the project all the way from its inception to its current status by reporting on its background, organisation, methodology and logistics.

The SMTP deployed a total of 73 Malaise traps - a Swedish invention designed to capture flying insects - and placed them across the country, where they remained from 2003 to 2006. Subsequently, the samples were sorted by a dedicated team of staff, students and volunteers into over 300 groups of insects ready for further study by expert entomologists. At the present time, this material can be considered as a unique timestamp of the Swedish insect fauna and an invaluable source of baseline data, which is especially relevant as reports of terrifying insect declines keep on making the headlines across the world.

The first author and Project Manager of the SMTP, Dave Karlsson started his academic paper on the project's results years ago by compiling various tips, tricks, lessons and stories that he had accumulated over his years as SMTP's Project Manager. Some fun examples include the time when one of the Malaise traps was destroyed by a moose bull rubbing his antlers against it, or when another trap was attacked and eaten by a group of 20 reindeer. The project even had a trap taken out by Sweden's military! Karlsson's intention was that, by sharing the details of the project, he would inspire and encourage similar efforts around the globe.

Karlsson has worked with and trained dozens of workers in the SMTP lab over the past decade and a half. Some were paid staff, some were enthusiastic volunteers and a good number were researchers and students using SMTP material for projects and theses. Thus, he witnessed first-hand how much excitement and enthusiasm the work on insect samples under a microscope can generate, even in those who had been hesitant about "bugs" at first.

Stressing the benefits of traditional morphological approaches to inventory work, he says: "Appreciation for nature is something you miss when you go 'hi-tech' with inventory work. We have created a unique resource for specialists in our sorted material while fostering a passion for natural history."

Sorted SMTP material is now available to specialists. Hundreds of thousands of specimens have already been handed over to experts, resulting in over 1,300 species newly added to the Swedish fauna. A total of 87 species have been recognised as new to science from the project thus far, while hundreds more await description.

The SMTP is part of the Swedish Taxonomy Initiative, from where it also receives its funding. In its turn, the latter is a project by the Swedish Species Information Center, a ground-breaking initiative funded by the Swedish Parliament since 2002 with the aim of documenting all multicellular life in Sweden.

The SMTP is based at Station Linné, a field station named after the famous Swedish naturalist and father of taxonomy, Carl Linneaus. Situated on the Baltic island of Öland, the station is managed by Dave Karlsson. Co-authors Emily Hartop and Mathias Jaschhof are also based at the station, while Mattias Forshage and Fredrik Ronquist (SMTP Project Co-Founder) are based at the Swedish Museum of Natural History. 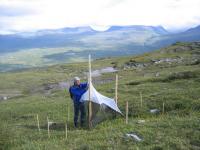 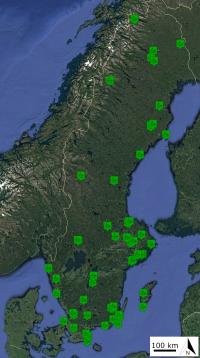