Describing the likely dispersal corridor for the ancestral lineage of the bee genus Homalictus will help understand the social evolution of the vibrant halictine bees, South Australian, Czech and PNG researchers say in a new paper.

It follows earlier research* connecting the origin of other Australian bees to the polar south or Antarctica routes millions of years ago - helping to explain the diversity and complexity of natural ecosystems and their resilience or susceptibility during periods of climate change.

Ecologists are hopeful that the diverse origins of native bees are giving them an edge in withstanding and adapting further to climate change.

"Our study highlights the importance of the habitat and ecology of tropical regions, including Papua New Guinea and the Fijian islands, for our endemic species and shows us how these bees might have expanded across the Pacific and possibly higher latitudes of Southeast Asia."

"Many species historically evolved under difference climatic conditions and those different histories may determine how they will cope with new climates," he says.

"As climates change, species that have narrow thermal tolerances that are unable to adapt either track their preferred climate by moving, or become extinct. We see this in our studies on tropical bees and also in the studies of Antarctic biodiversity."

"What has not been fully appreciated is the movement of bees in the southern hemisphere that included Antarctica as a likely dispersal corridor before it became the glacial continent that it is today."

In contrast to the colourful tropical varieties, SA researchers have previously explored the origins of the cooler adapted and less colourful Exoneurine allodapine bees, believed to have originated in Africa but dispersed to Australia about 42-34 million years ago from Antarctica when there was still a land bridge connection to Tasmania.

Co-author on the online Homalictus paper, Associate Professor Mike Schwarz says Australia has the most unusual bee fauna in the world, resulting from three major events - the gradual breakup of Gondwana, then a period when the bees evolved in "splendid isolation", long before humans arrived.

"Thirdly, there was a northern influx of species from tropical Asia as the Australian continent collided with Asia. "Australia's complex systems diversity if a key ingredient for survival of our species," Flinders Associate Professor Schwarz says.

"Hopefully, the diversity of our native bees will make them more resilient to future climate scenarios, which will be critical for agriculture in a changing world.

The new paper, Origin and dispersal of Homalictus (Apoidea: Halictidae) across Australia, Papua New Guinea and Pacific (2020) by S Ibalim, SVC Groom , JB Dorey, A Velasco-Castrillon, MP Schwarz and MI Stevens has been published in Transactions of the Royal Society of South Australia, DOI: 10.1080/03721426.2020.1740957

This work was supported by the Australia and Pacific Science Foundation

*Biogeographical origins and diversification of the exoneurine allodapine bees of Australia (Hymenoptera, Apidae) (2011) by L Chenoweth and M Schwarz was published in the Journal of Biogeography DOI: 10.1111/j.1365-2699.2011.02488.x

Transactions of the Royal Society of South Australia 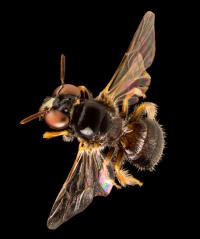 A male Exoneurella tridentate, thought to have Antarctic origins).