An octopus's arms are covered in hundreds of suckers that will stick to just about anything, with one important exception. Those suckers generally won't grab onto the octopus itself; otherwise, the impressively flexible animals would quickly find themselves all tangled up.

Now, researchers from the Hebrew University of Jerusalem report in the Cell Press publication Current Biology on May 15 that they have discovered how octopuses manage this feat, even as the octopuses' brains are unaware of what their arms are doing. A chemical produced by octopus skin temporarily prevents their suckers from sucking.

"We were surprised that nobody before us had noticed this very robust and easy-to-detect phenomena," says Guy Levy, who carried out the research with co-first author Nir Nesher. "We were entirely surprised by the brilliant and simple solution of the octopus to this potentially very complicated problem."

Binyamin Hochner and his colleagues had been working with octopuses for many years, focusing especially on their flexible arms and body motor control. There is a very good reason that octopuses don't know where their arms are exactly, in the same way that people or other animals do.

"Our motor control system is based on a rather fixed representation of the motor and sensory systems in the brain in a formant of maps that have body part coordinates," Hochner explains.

That works for us because our rigid skeletons limit the number of possibilities. "It is hard to envisage similar mechanisms to function in the octopus brain because its very long and flexible arms have an infinite number of degrees of freedom," Hochner continues. "Therefore, using such maps would have been tremendously difficult for the octopus, and maybe even impossible."

Indeed, experiments have supported the notion that octopuses lack accurate knowledge about the position of their arms. And that raised an intriguing question: How, then, do octopuses avoid tying themselves up in knots?

"The results so far show, and for the first time, that the skin of the octopus prevents octopus arms from attaching to each other or to themselves in a reflexive manner," the researchers write. "The drastic reduction in the response to the skin crude extract suggests that a specific chemical signal in the skin mediates the inhibition of sucker grabbing."

In contrast to the behavior of the amputated arms, live octopuses can override that automatic mechanism when it is convenient. Living octopuses will sometimes grab an amputated arm, and they appear to be more likely to do so when that arm was not formerly their own.

Hochner and his colleagues haven't yet identified the active agent in the animals' self-avoidance behavior, but they say it is yet another demonstration of octopus intelligence. The self-avoidance strategy might even find its way into bioinspired robot design.

"Soft robots have advantages [in] that they can reshape their body," Nesher says. "This is especially advantageous in unfamiliar environments with many obstacles that can be bypassed only by flexible manipulators, such as the internal human body environment."

In fact, the researchers are sharing their findings with European Commission project STIFF-FLOP, aimed to develop a flexible surgical manipulator in the shape of an octopus arm. "We hope and believe that this mechanism will find expression in such new classes of robots and their control systems," Hochner says.

Current Biology, Nesher et al.: "Self-recognition mechanism between skin and suckers prevents octopus arms from interfering with each other."

How octopuses don't tie themselves in knots 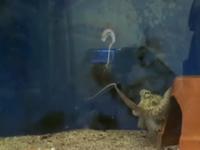