If you come across someone who can tell you by heart and without cheating what a kilogram is after 20 May 2019, beware! It is probably a particular kind of scientist, a metrologist, who is still overly enthusiastic about the fundamental change experienced by the International System of Units, the SI. From 20 May 2019 on (World Metrology Day 2019), things as abstract as natural constants will be the measure of all things when it comes to defining what exactly a kilogram, an ampere, a kelvin and a mole exactly are. After years of research at the major metrology institutes, and in particular at the Physikalisch-Technische Bundesanstalt (PTB), the world community eventually agreed upon this revision of the System of Units - a revision that comes into force as of on World metrology Day.

The 20th of May, 2019 marks a break in the development of physical and technical units of measurement. From this day on, the definitions of the units as we used to know them are a thing of the past. Gone are the times when a small metallic cylinder kept in a safe of the Bureau International des Poids et Mesures (BIPM) in Sevres (Paris) represented the kilogram for the whole world. Also gone are the times when an idealized setup consisting of two strictly parallel conductors of infinite length and negligible diameter and with a distance of one meter between them had to be used to define what the unit of electric current was supposed to mean.

On 20 May 2019, the units we use to measure the world were put on the most solid ground one can imagine from a physical point of view. A set of natural constants with defined values now represents the basis for the definitions of all units. In principle, the idea of defining units of measurement on the basis of natural constants is not new. What began 50 years ago with the definition of the second by means of atomic clocks, and continued over 30 years ago with the definition of the meter with the aid of the speed of light, will now continue for all of the units in the International System of Units (SI). Four other constants will be playing the leading roles: Planck's constant, h, the Avogadro constant, NA, the Boltzmann constant, k, and the charge of the electron, e.

In metrology laboratories, extensive experiments have taken place over the past several years to measure these very constants as well as possible. These measurements, which were mainly carried out at the leading metrology institutes such as PTB (Germany), NIST (USA), NMIJ (Japan) and NRC (Canada), have been successful: the target measurement uncertainties have been achieved and the requirement that the experiments take place independently of one another has been fulfilled. Based on these measurements, it was therefore possible to determine the numerical values attributed to the fundamental constants concerned very accurately.

The following applies to the new formulation of the SI: if measurements can be more precise, then the units can be realized with greater accuracy as well without changing the definition they are based on. In a high-tech world where neither length subdivision ends with nanometers nor time subdivision ends with femtoseconds, this technical openness of the new SI is a huge bonus for all future progress in terms of accuracy. The revision of the system of units thus provides better preconditions for innovation wherever very high accuracy is required, for example, when developing quantum technologies, enhancing diagnostic capabilities in the medical sector, improving the efficiency of energy harvesting or the analytical methods used in climate research. And this openness applies to the whole scale of the unit concerned, since the fundamental constants do not emphasize any particular section of a scale. This differs somewhat from the present situation, where the kilogram merely fixes one precise point on the mass scale, namely the 1 kg graduation mark, or where the triple point of water merely fixes a single value on the temperature scale, namely the 0.01 °C graduation mark.

The definitions in the system of units have been entirely revised in order to remedy the previous system's deficiencies. However, the changes will go unnoticed in everyday life. In technological fields, progress will become evident in the long run. In contrast, progress for the scientific community will take effect as soon as the new definitions enter into force. Another advantage speaks for itself: natural constants are universally valid. The new SI has thus established a universal language that the international community has now agreed to use.

And why is this important for me? That's a legitimate question! Most people probably will not notice that the kilogram and a number of other physical units have had a new definition since May 2019. In the fields of science and industry, however, it is possible that doors to innovation and completely new discoveries have been opened. We need to back up, though. Who will be affected?

You haven't noticed any changes since the kilogram was redefined in May 2019? Just as before, one kilogram of apples weighs 1000 grams and the bathroom scale hasn't displayed any inexplicable changes? Wonderful, that was the plan! The new basis of the unit kilogram was chosen like that so that we would not notice any change from the transition in our daily lives.

As soon as the new System of Units has found its way into textbooks, the subject of "units of measurement" will become quite challenging for school students. The definition of the kilogram will become much more abstract. Whereas before, it was enough to know that the international prototype of the kilogram, stored in a Parisian safe, is the "mother" of all kilograms, natural constants will now play a greater role at school. The scientific and cultural history of the units should also be passed down to the general public in the form of museum displays. To this end, PTB and the Deutsches Museum in Munich have set up a permanent exhibition to meet these concerns. It is titled "Alles in Maßen - Maße für alle" (All in good measure - measurements for everyone).

Finally, the kilogram and all the other units have a stable basis! The natural constants, on which they are based, are unchanging according to modern knowledge. With the international prototype of the kilogram this was very different: Its mass changed over the course of the decades in comparison with its copies. And theft or damage would have been a catastrophe! The current "recipe" for a kilogram, however, is now valid forever and everywhere.

It may not be obvious right away, but the new System of Units is more open for innovation than the previous one. In the past, the international prototype of the kilogram defined exactly one point on the mass scale. That meant that the regions to the left and to the right of this point became increasingly uncertain. In the future, any number of points can be realized anew on the respective scale. This could be the start for new developments in measurement and calibration.

Mathematics and the natural constants are part of a world language which is understood everywhere - everywhere on earth just as in space. This language is universal in the truest sense of the word. It should now even no longer be a problem to share information and goods with our neighbours on Alpha Centauri! (PTB/jes/if)

Decisions of the 26th meeting of the General Conference of Weights and Measures, Versailles, 13-16 November 2018, https://www.bipm.org/en/measurement-units/rev-si/

"Research on the new SI", an entire chapter of PTB's website dedicated to the new SI, with publications such as the PTB-Mitteilungen, facts and figures and much more information about the new SI: https://www.ptb.de/cms/en/research-development/research-on-the-new-si.html

Power to the constants! 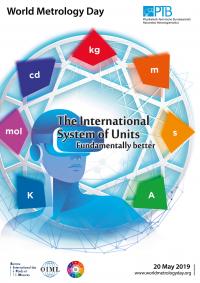 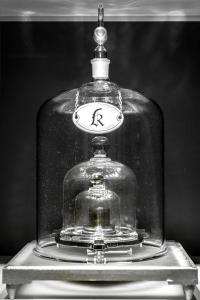 the International Prototype of the Kilogram