One part of the vacuum vessel (the plasma facing material) of the fusion experimental device and future fusion reactor comes into contact with plasma. When the plasma ions enter into the material, those particles become a neutral atom and stay inside the material. If seen from the atoms that compose the material, the plasma ions that entered become impurity atoms. The impurity atoms migrate slowly in interspaces among the atoms that composes the material and eventually, they diffuse inside the material. On the other hand, some impurity atoms return to the surface and are again emitted to the plasma. For the stable confinement of fusion plasma, the balance between the penetration of plasma ions into the material and the re-emission of impurity atoms after migration from inside the material becomes extremely important. The migration path of impurity atoms inside materials with ideal crystal structure has been well elucidated in many research. However, actual materials have polycrystalline structures, and then migration paths in grain boundary2) regions had not been clarified yet. Further, in a material that continuously touches plasma, the crystal structure is broken due to the excessive incursion of plasma ions. The migration paths of impurity atoms inside a material with a disordered crystal structure had not been sufficiently examined. The research group of Professor Atsushi Ito, of National Institutes of Natural Sciences NIFS, has succeeded in developing a method for automatic and rapid search regarding migration paths in materials having arbitrary atom geometry through molecular dynamics and parallel calculations in a supercomputer. First, they take out numerous number of small domains that cover the entire material. Inside each small domain they compute the migration paths of impurity atoms through molecular dynamics. Those calculations of small domains will be finished in a short time because the size of the domain is small and the number of atoms to be treated is not many. Because the calculations in each small domain can be conducted independently, calculations are performed in parallel using the NIFS supercomputer, the Plasma Simulator, and the HELIOS supercomputer system at the Computational Simulation Centre of International Fusion Energy Research Centre (IFERC-CSC), Aomori, Japan. On the Plasma Simulator, because it is possible to use 70,000 CPU cores, simultaneous calculations over 70,000 domains can be performed. Combining all of the calculation results from the small domains, the migration paths over the whole material are obtained. Such a parallelization method of super computer differs from the one often used, and is called MPMD3)-type parallelization. At NIFS, a simulation method that effectively uses MPMD-type parallelization had been proposed. By combining the parallelization with recent ideas regarding automatization, they have arrived at a high-speed automatic search method for the migration path. By utilizing this method, it becomes possible to search easily the migration path of impurity atoms for actual materials that have crystal grain boundaries or even materials of which crystal structure become disordered by long duration contact with plasma. Investigating the behavior of collective migration of impurity atoms inside material based upon information regarding this migration path, we can deepen our knowledge regarding the particle balance inside the plasma and the material. Thus improvements in plasma confinement are anticipated.

These results were presented in May 2016 at the 22nd International Conference on Plasma Surface Interaction (PSI 22), and will be published in the journal Nuclear Materials and Energy.

Plasma - Material interaction, in fusion research, is researched as a goal for pursuing the long-term soundness of wall materials. As fields outside of fusion, the interaction is researched for the purpose of the development of processing techniques that actively use plasma like the processing of semiconductors and surface coating, and others. The automatic investigation method, shown in this research, for the migration path of impurity atoms in the material that touches the plasma is currently being under consideration for its application to material processing that used this type of plasma. This method, because it may be used commonly for migration of impurity atoms and additive material atoms can be anticipated for broad applications that cross fields.

A computer simulation method for the physical movement of atoms or molecules. We approximate the interaction among atoms and molecules by the interatomic potential and determine the orbit of each particle by solving numerically the Newton motion equation.

Numerous materials are not of a single beautiful crystal (single crystal), rather, of the structure formed from numerous small crystal grains (several crystals). We call a boundary among two or more crystals as the crystal grain boundary. The size of a crystal grain forming multiple crystals is of the order of 1 μm (micrometers) in the case of tungsten.

A computer simulation technique that uses random numbers is commonly called the Monte Carlo method. The dynamic Monte Carlo method is a simulation method that takes statistical mechanics and the theory of stochastic processes as its basis, establishes the frequency of occurrence of each phenomenon (transition probability), and pursues time development that follows transition probability.

How do impurities move in tungsten? 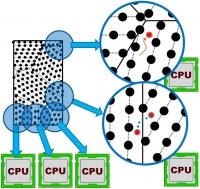 An Automatic Search of the Migration Path