A new study on an exceptionally preserved salamander from the Eocene of France reveals that its soft organs are conserved under its skin and bones. Organs preserved in three dimensions include the lung, nerves, gut, and within it, the last meal of the animal, according to a study published in the peer-reviewed journal PeerJ by a team of palaeontologists from France and Switzerland.

Accessing the complete anatomy of an extinct animal, i.e. both its external and internal aspects, has often been the dream of palaeontologists. Indeed, in 99% of cases, fossils are only represented by hard parts: bones, shells, etc. Fossils preserving soft tissues exist, but they are extremely rare. However, their significance for science is enormous. What did the animal look like? What did they eat? How did they live? Most of these questions can be answered by exceptionally preserved fossils.

The newly studied fossil externally looks like a present-day salamander, but it is made of stone. This fossil "mummy" is the only known specimen of Phosphotriton sigei, a 40-35 million years old salamander and belongs to the same family as the famous living fire salamander (Salamandra salamandra).

It is unfortunately incomplete: only the trunk, hip and part of hind legs and tail are preserved. Until very recently, the only thing palaeontologists could tell about this specimen was visible anatomical details, such as the cloaca, the orifice used for reproduction and by digestive and urinary canals. Indeed, though it was discovered in the 1870s, it was never studied in detail.

Thanks to recent synchrotron technology, its skeleton1 and various organs2 could be studied. The specimen was scanned at the ID19 beamline of the European Synchrotron Radiation Facility (ESRF) in Grenoble (France). This modern technology gave access to an incredible level of details that could never have been achieved before without slicing the specimen into a series of thin sections.

The quality of preservation is such that looking at the tomograms (equivalent of radiograms) feels like going through an animal in the flesh. At least six kinds of organs are preserved in almost perfect condition, in addition to the skin and skeleton: muscles, lung, spinal cord, digestive tract, nerves, and glands.

But the most incredible is the preservation of frog bones within the stomach of the salamander. Salamanders almost never eat frogs or other salamanders, though they are known to be quite opportunistic. Was it a last resort meal or a customary choice for this species? This, unfortunately, will probably never be known.

These new results are described by Jérémy Tissier from the Jurassica Museum and the University of Fribourg in Switzerland, and Jean-Claud Rage and Michel Laurin, both from the CNRS/Museum national d'histoire naturelle/UPMC in Paris.

Author Michel Laurin notes, "This fossil, along with a few others from the same lost site, is the most incredibly well-preserved that I have seen in my entire career. And now, 140 years after its discovery, and 35 million years after the animal died, we can finally study it, thanks to modern technology. The mummy returns!"

Image 2: Synchrotron tomography permitted access to the inside of the "mummy". The skeleton and several organs are perfectly preserved. (Credit: Jérémy Tissier CC BY)

Image 3: Fossil specimen of Phosphotriton sigei, an exceptionally preserved 40-35 million years old salamander (left part) and its internal organs conserved within it (right part). The skeleton, in grey, is perfectly preserved, as well as several soft organs such as the gut and lung. Within the stomach, the last meal of the animal is also preserved. Surprisingly, it fed on a frog, an extremely rare kind of prey for salamanders. Accessing the internal anatomy of this fossil without destroying it could only be achieved through modern synchrotron technology. (Credit: Jérémy Tissier CC BY)

Video A: 3D reconstruction of the skeleton of Phosphotriton sigei. (Credit: Jérémy Tissier CC BY)

Video B: Frog bones preserved inside the stomach of the salamander. (Credit: Jérémy Tissier CC BY)

PDF of this Press Release: static.peerj.com/pressReleases/2017/10/Press-Release-Tissier.pdf

Link to the Published Version of the article: https://peerj.com/articles/3861 your readers will be able to freely access this article at this URL.

All works published in PeerJ are Open Access and published using a Creative Commons license (CC-BY 4.0). Everything is immediately available -- to read, download, redistribute, include in databases and otherwise use--without cost to anyone, anywhere, subject only to the condition that the original authors and source are properly attributed. 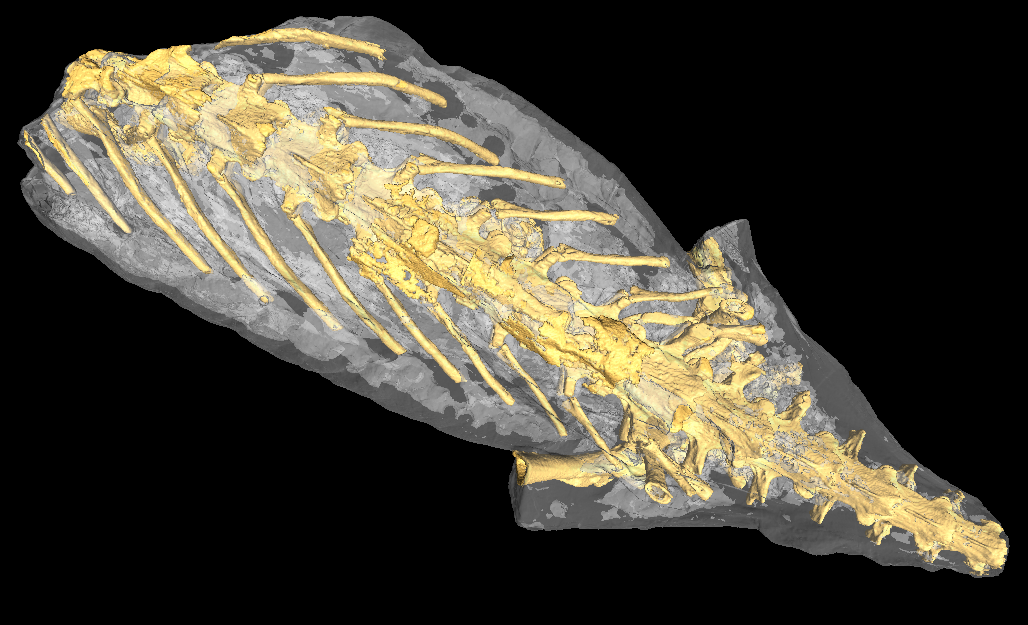 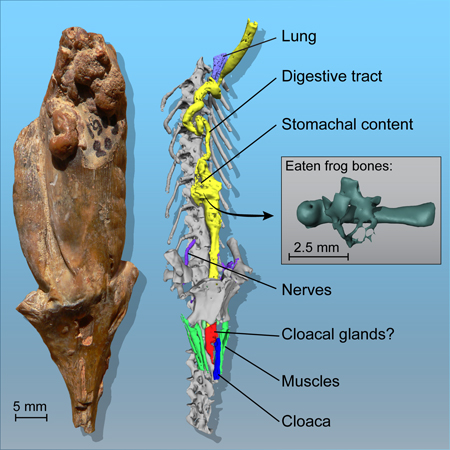