In what might be the first study to report continuous measurements of net CO2 exchange of urban vegetation and soils over a full year or more, scientists from UC Santa Barbara and the University of Minnesota conclude that not only is vegetation important in the uptake of the greenhouse gas, but also that different types of vegetation play different roles. Their findings will be published July 4 in the current issue of the Journal of Geophysical Research – Biogeosciences, a publication of the American Geophysical Union.

"There has been little research of this type in the urban landscape," said Joe McFadden, an associate professor in the UC Santa Barbara Department of Geography, and a co-author of the study. While continuous CO2 measurements have been made in natural ecosystems all around the globe, only in the past few years have researchers attempted to use them in developed areas such as cities and suburbs, which often contain large amounts of green space.

"The net exchange of CO2 between the land and the atmosphere is determined by the balance between things that release CO2, such as burning fossil fuels and respiration of living organisms, and the uptake of CO2 by plant photosynthesis," said first author Emily Peters, from the University of Minnesota.

Using a method of measuring CO2 exchange that involves placing sensors high above the ground to record tiny changes in CO2, temperature, water vapor and wind, McFadden and Peters set out to monitor the suburbs just outside of St. Paul, Minn., a place with distinct seasonal changes and enough rainfall for plants to grow without irrigation.

"The question was: Can we see what the green space is doing against the backdrop of human activities?" said McFadden.

The researchers found that typical suburban greenery, such as trees and lawns, played significant roles with respect to CO2 uptake. For nine months out of the year, the suburban landscape was a source of CO2 to the atmosphere; but during the summer, the carbon uptake by vegetation was large enough to balance out fossil fuel emissions of carbon within the neighborhood. Compared to the natural landscape outside the city, the peak daily uptake of CO2 in the suburbs would have been at the low end uptake for a hardwood forest in the region.

However, the activity of the vegetation also differs by type, according to the study.

"Lawns' peak carbon uptake occurred in the spring and fall, because they are made up of cool-season grass species that are stressed by summer heat," said Peters, "while trees had higher CO2 uptake throughout the summer." Evergreen trees maintained their CO2 uptake for a longer period of time than deciduous trees because they keep their leaves year-round; deciduous trees lose their leaves in fall and winter.

The study was funded by NASA and is a "first step" toward quantifying the role of vegetation in extensive developed areas, like suburbs, which are the parts of urban areas growing most rapidly in the country. Potential uses for this type of research include urban planning –– where land use and vegetation choices are major decisions –– and policy decisions based on reducing greenhouse gases.

There are a couple of caveats to consider before deciding to lay out the turf or make any big changes in urban tree planting, McFadden noted. The amount of CO2 taken up by vegetation in the suburban area was not enough to balance out, or "offset", the total amount of CO2 released by burning fossil fuels over the course of the year. "Unfortunately, far from it," said McFadden, "We will still need to find ways to lower our carbon footprint."

Additionally, in more arid places like the western United States, where irrigation is a must for lawns and landscaping, the delivery of water comes with its own cost in carbon, as water is pumped from elsewhere. McFadden says further projects in California urban areas are underway.

"This study just gives us a lens into what the green spaces in developed areas are doing," he said. 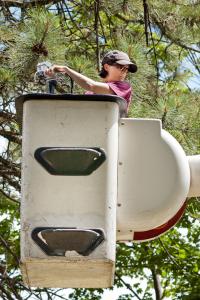 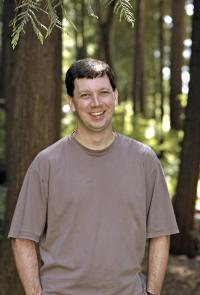