Three widely differing forms of European Scambus parasitoid wasps that had previously been regarded as distinct species are shown to be seasonal morphs of a single species. The collaboration involved National Museums Scotland (Mark Shaw), a private individual (Malcolm Jennings) and Imperial College London + Natural History Museum (Donald Quicke). It was published in the open access Journal of Hymenoptera Research.

The findings depended on examination of museum collections with good data standards, targeted fieldwork to rear specimens from known hosts at different times of year, and experimental rearings of progeny from spring females through summer hosts. DNA sequence data provided confirmation that the rearing results were real, and not the result of overlooked contaminants.

The adults of these parasitoids paralyse their concealed hosts, which are small caterpillars or beetle larvae, before laying an egg beside the host. The host remains paralysed and is consumed by the resulting parasitoid larva, which then pupates and eventually becomes an adult, emerging from the same place. One morph (S. planatus: Fig.1), which occurs in spring, has a robust head to accommodate the powerful muscles needed to chew out of acorns in which it has been a parasitoid of micromoth and weevil larvae attacked the previous autumn. Females of this morph live for several weeks, during which they become darker and their abdomen broadens considerably (S. ventricosus). Towards the middle of summer, this morph matures its eggs and parasitises micromoth larvae living in relatively soft silken retreats among foliage. Within a few weeks, adults of the next generation emerge from this substrate, having much less powerful heads (S. calobatus: Fig. 2), and these adults then seek tenented acorns in which to oviposit in autumn. The spring-emerging and summer-emerging forms also differ in their ovipositor lengths. This life-cycle was confirmed experimentally by allowing the S. ventricosus morph, originating from acorns, to parasitise the summer hosts which then produced adults of the S. calobatus morph. Because S. calobatus is the oldest of the three names, this is the one that has to be used for this seasonally variable, but none-the-less single, species in the future.

"It was satisfying to be able to follow this hunch through to such a conclusive result" says the senior author Mark Shaw. "It shows the importance of good collections, careful field work, and focussed experimentation. Almost certainly there will be other similar cases." 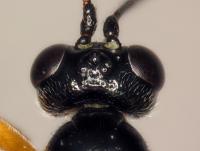