SAN FRANCISCO (September 5, 2017)--A charismatic owl iconic to Pacific Coast forests is no longer ruling the roost, and scientists now have another tool for understanding its decline. Researchers have assembled the California Academy of Sciences' first-ever animal genome after sequencing the DNA of the northern spotted owl (Strix occidentalis caurina). In collaboration with the University of California Berkeley (UC Berkeley), University of California San Francisco (UCSF), the National Museum of Natural History in Paris, and the Howard Hughes Medical Institute, Academy scientists extensively mapped the bird's genetic material to better understand how this threatened forest dweller is interacting with non-native owls invading its habitat. Findings are published this month in Genome Biology and Evolution.

"The northern spotted owl is special because it's our backyard bird here in the Bay Area--found from Marin County, California all the way north to British Columbia," Dr. Jack Dumbacher says, Academy curator of ornithology and mammalogy.

Marked by white spots across a brown chest, the northern spotted owl vocalizes two to three short hoots followed by a longer hooooo from its perch on centuries-old trees in old-growth forests. But standing at a foot-and-a-half tall, this top predator is now rarely seen or heard. The bird experienced a rapid decline and has been federally listed as threatened under the Endangered Species Act since 1990.

"We've really seen a perfect storm with many factors complicating the northern spotted owl's recovery," Dumbacher says. But this storm is unprecedented, so researchers are working to track how it unfolds in forests across the West.

Over the past half-century, the barred owl (Strix varia)--a close relative formerly found east of the Rocky Mountains--has flown onto the scene. Notable for its larger size and more aggressive behavior, barred owls have vertical dark markings against a white belly and a hooting call birders mimic with the words, "Who cooks for you?"

Barred and northern spotted owls now have overlapping geographic ranges and compete with one another for prey and breeding territories. To complicate matters, timber harvest has reduced available habitat for both species. The barred owl is the scrappier of the two, enjoying a more varied diet and producing more young, more often--ultimately emerging as the super competitor.

"We wanted to know how the barred owl's range expansion will play out evolutionarily," Zachary Hanna says, lead author and Academy-affiliated student who is currently a PhD candidate at UC Berkeley in the Museum of Vertebrate Zoology. Scientists have noticed barred and spotted owls interbreeding and hatching hybrid offspring since the late 1980s.

"I think we're going to see more hybridization in the future," Hanna adds, "so these owls are serving as a case study for how species that have been isolated for millions of years might interact in the face of a rapidly changing world."

Barred owls were first recorded in Marin County in 2003. In 2005, an injured northern spotted owlet was ushered in to WildCare, a wildlife rehabilitation center in San Rafael, California, for assistance. The female (later named Sequoia) was deemed unfit for release back into the wild. Her healed injuries had resulted in noisy flight and she could no longer successfully hunt prey.

Sequoia showed no plumage or vocalizations that would indicate telltale signs of a hybrid, meaning she was an indisputable representative of her species. The research team took a small blood sample during one of Sequoia's routine physicals and extracted enough DNA to get a clear understanding of her genetic identification.

"The advanced genetic techniques we used to sequence Sequoia's DNA are much like shredding a book and putting it back together again using overlapping sentences," Dumbacher says. Hanna applied new sequencing strategies to read millions of short genetic regions and used powerful computers and assembly software to compile the genome again.

In addition to Sequoia, the team also sequenced a barred owl individual from the eastern United States as a baseline of comparison for better evaluating the frequency of interbreeding and tracking hybrid offspring in the wild. Researchers now have the genetic tools to perform a variety of analyses, and hopefully understand whether interbreeding between barred owls might directly threaten the extinction of northern spotted owls.

In addition to tackling critical conservation questions, this landmark assembly of the northern spotted owl's genome has allowed scientists to better understand the evolution of night vision across bird species. Several previous studies suggested that owls lost various color receptors in their eyes over time. The research team has used the full genome to search for and confirm that genes responsible for color receptors are indeed absent in owls.

"Much like cave salamanders that have lost their eyes after being in the dark, owls too appear to have lost their violet opsin--the receptor birds use to see violet and ultraviolet light," Dumbacher says. But, strikingly, genetic analysis revealed that owls still have a capacity to discriminate color (although it's greatly reduced from that of ancestral birds). In fact, owls still retain more of their light and color sensitivity than most mammals.

The research team hopes that the sequenced genome (available online) will doubly inform the evolution of night vision in birds as well as broader conservation strategies for the northern spotted owl--ensuring this nocturnal predator calls hoot-hoothoot-hooooo across its native forests for generations to come. 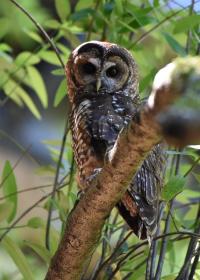