Land plants dominate terrestrial flora, and our foodstuff heavily depends on them. How land plants evolved from aquatic algae has been a problem attracting much scientific attention. In 2011, Dr. Nishiyama, one of the present authors published an article in collaboration with other researchers comparing Chlamydomonas reinhardtii, the moss Physcomitrella patens, a spikemoss species (Selaginella moellendorffii) and the thale cress (Arabidopsis thaliana). The comparison revealed that, after the separation of the ancestor of land plants from Chlamydomonas, a number of genes were acquired before the diversification of land plants. However, Chlamydomonas and land plants are distantly related with a divergence time of a billion years, so the genome sequences of green algae, closer to land plants, was of clear interest. In 2014, Dr. Hori and others lead by Prof. Ohta at Tokyo Institute of Technology published the genome sequence of Klebsormidium nitens, a filamentous green alga closer to land plants than Chlamydomonas; they showed that Klebsormidium nitens has genes important for living on land equivalent to those of land plants.

Three groups of green algae are evolutionarily closer to land plants than Klebsormidiophyceae, that is, Charophyceae, Coleochaetophyceae and Zygnematophyceae (Figures 1 and 2). Among them, the Charophyceae form the most complex bodyplan with reproductive organs, antheridia and oogonia. In fact, Pringsheim, in the 1860s, already suggested that Chara (presently placed in Charophyceae) is closely related to land plants. Zygnematophyceae are considered to be the extant lineage closest to land plants, but they have a sexual reproduction system, in which gametes (reproductive cells) that are almost equal in size fuse to form zygotes, rather than with a large egg and a small swimming sperm cell. In the present study, we reveal the genome of Chara braunii*1), which is considered to have separated from land plants 550 to 750 million years ago.

Here, 60 researchers from 40 institutions of 13 countries participated in the genome analysis of Chara braunii, a representative of Charophyceae*2). They have obtained a draft genome sequence, which is practically sufficient for comparison with the genomes of other organisms. The draft genome sequence is deposited at the DNA Data Bank of Japan (DDBJ*3)) and available through the International Nucleotide Sequence Database Collaboration (INSDC).

This study was originated by the researchers at Kanazawa University and Kobe University. Chara braunii individuals were collected at Lake Kasumigaura, Ibaraki and at Saijo city, Ehime, Japan. Strains were established, free from other algae, which can be grown in laboratories, and used for genome analysis. The genome size was estimated to be large (about 2 Gbp, about two-thirds of the human genome). Illumina next generation sequencers at the National Institute of Genetics, Japan, were used for most of genome sequencing. After assembling raw sequences into scaffolds, the scaffold sequences that appeared to have originated from bacteria were excluded, and 1.75 Gbp of scaffold sequences were obtained. cDNA (mRNA was reverse transcribed into complementary DNA) was cloned in Escherichia coli at the University of Tokyo and the resulting library was randomly selected and sequenced by a conventional sequencer to produce short sub-sequences (referred to as expressed sequence tag, EST). These data were used together with the high-throughput sequence data obtained from cDNA by using Illumina next generation sequencers at the University of Tokyo and another data obtained from cDNA by the European group to predict the genes contained, and 35,422 gene structures were estimated.

The last common ancestor of Charophyceae and land plants was estimated, in this study, to possess all the genes known from land plants for cell division except one, TANGLED1. Among the genes known to be involved in the phytohormone biosynthesis and responses of land plants, Chara braunii was found to possess all the genes involved in the ethylene signaling system, while Klebsormidium nitens lacks one gene, EIN2. In addition, Chara braunii is found to have genes encoding Aux/IAA and ARF, transcription factors (genes that regulate expression of other genes) involved in the auxin response. These genes were not found in Klebsormidium nitens. On the other hand, since the TIR1-type receptor is not found in either Chara braunii or in Klebsormidium nitens, there may be unknown mechanisms acting in auxin response. Receptors for abscisic acid (PYR), jasmonic acid, and salicylic acid were not identified, indicating that the receptors found in land plants were probably gained after separation of Charophyceae and land plants. Furthermore, Chara braunii has an ortholog of GUN1, a key of the system to regulate the synthesis of chloroplast proteins by the "retrograde-" signaling from chloroplast to nucleus as seen in land plants. Chara braunii possesses more transcription factors than other green algae whose genomes have been determined.

The morphological complexity of Charophyceae may have originated from expansion of gene families after separation from land plants; thus such expansion should be independent from that of land plants. In particular, reactive oxygen species (ROS) gene network, LysM receptor-like kinases and expansion of trihelix transcription factor families should be noted. Transcriptomic analysis of sexual reproductive structures reveals intricate control by transcription factors, activity of the ROS gene network, and proteins involved in storage of nutrients and the ancestral use of plant-like storage and stress protection proteins in the zygote.

These analyses based on the Chara braunii draft genome sequence show that a variety of traits important for land plants for their terrestrial life already exist in the common ancestors of Charophyceae and land plants, which reveals that those traits peculiar to land plants were acquired before the emergence of the oldest land plants.

The present study successfully revealed the genome sequence of Chara braunii. This sequence will be referred to in developmental and genetic studies in land plants, and contribute to understanding the evolution of land plants. Since Chara cells are so large, they have been used for electrophysiological studies using a micro-electrode to measure the membrane potential. Knowledge of its genome will be beneficial understanding the molecular mechanisms underlying such physiological parameters.

In addition, Chara braunii is a cosmopolitan species distributed widely around the globe except in Antarctica and is ecologically adapted to a variety of environments. The Chara braunii strains used in this study were collected at Lake Kasumigaura, Ibaraki and at Saijo city, Ehime, Japan. The one from Lake Kasumigaura appears to be adapted to shallow water with abundant light, while the one from Saijo city is apparently adapted to deep water with lower light levels. By studying the genome sequences in relation to different environmental conditions, it may be possible to analyze and elucidate adaptation mechanisms.

Chara braunii is one of the species of Charophyceae. Chara braunii is a large multicellular alga, living in fresh and in brackish water. Its thallus consists of stem-like structure (axes) and whorls of branch-like structures (called branchlets). The Japanese name, shajikumo, relates to its shape: a stem with branchlets looking like a wheel with spokes and a shaft ('shajiku') ('mo' means alga).

A taxa including Chara, Nitella, and several other genera (Order Charales). While Charophyceae sometimes refer to broader organisms, here we refer to the same range as order Charales, as class Charophyceae, to match Klebsormidiophyceae, Coleochaetophyceae, and Zygnematophyceae. (Figure 2).

Abbreviation of DNA Data Bank of Japan. A Japanese institution to gather nucleotide sequence database as a member of INSDC (International Nucleotide Sequence Database Collaboration). It operates at the National Institute of Genetics (Japan). (https://www.ddbj.nig.ac.jp/aboutus-e.html)

In land plants, when a cell divides to give rise to two daughter cells, a new cell wall is formed between the two nuclei of the daughter cells. During this process, an array of microtubules, called the phragmoplast, perpendicular to this nascent cell wall is formed. Phragmoplasts are formed in some green algae like Chara, evolutionarily close to land plants, but is not formed in Klebsormidium, a green alga more distantly related to land plants. In such green algae, cell division (cytokinesis) is completed by cleavage furrow. In some algal species, microtubules are formed parallel to the nascent cell wall, and called the phycoplast. Because of the unique presence of phragmoplasts, the Charophyceae, Coleochaetophyceae, Zygnematophyceae and Embryophyta (land plants) are also collectively referred to as Phragmoplastophyta.

Elucidating the Chara genome: Implications for emergence of land plants in Paleozoic era 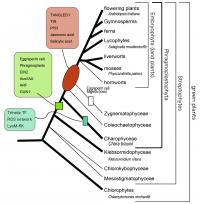