NEW BRUNSWICK, N.J. – Astronomers at Rutgers and Penn State universities have discovered galaxies in the distant universe that are ancestors of spiral galaxies like our Milky Way.

These ancient objects, some of the first galaxies ever to form, are being observed as they looked when the universe was a mere two billion years old. Today, scientists peg the universe’s age at 13.7 billion years, so light from these galaxies traveled almost 12 billion years to reach Earth.

The newly discovered galaxies are quite small – one-tenth the size and one-twentieth the mass of our Milky Way. They also have fewer stars – only one-fortieth as many as are in the Milky Way. From ground-based telescopes, they look like individual stars in size. Recent images made by the Hubble Space Telescope, however, reveal them as regions of active star formation.

“Finding these objects and discovering that they are a step in the evolution of our galaxy is akin to finding a key fossil in the path of human evolution,” said Eric Gawiser, assistant professor in the Department of Physics and Astronomy in the Rutgers School of Arts and Sciences. He presented findings from teams led by him and Caryl Gronwall, senior research associate in Penn State’s Department of Astronomy & Astrophysics, at the American Astronomical Society (AAS) annual meeting January 7-11, 2008 in Austin, Texas.

The researchers determined that these galaxies were fertile breeding grounds for new stars, which burned hot and bright. These stars ionized the hydrogen atoms around them, stripping them of their electrons and causing them to emit a tell-tale sharp band of ultraviolet light known as Lyman alpha.

The researchers also noted that several of these galaxies, sometimes 10 or more, pulled together over the ensuing few billion years to form a single spiral galaxy.

“The Hubble Space Telescope has delivered striking images of these early galaxies, with 10 times the resolution of ground-based telescopes,” Gronwall said. “They come in a variety of shapes – round, oblong, and even somewhat linear – and we are starting to make precise measurements of their sizes.” Gawiser previewed Gronwall’s early Hubble image analyses at the AAS meeting, noting that she will publish complete results in an upcoming journal article.

The astronomers discovered these galaxies as part of a five-year-old census of galaxies in the early universe, a project called MUSYC (Multi-Wavelength Survey by Yale and Chile). Gawiser, while a National Science Foundation (NSF) astronomy and astrophysics postdoctoral fellow at Yale, initiated a search for several types of galaxies that could be precursors of Milky Way-type spirals; Gronwall led an investigation into the luminosity, density and distribution of the distinctive Lyman alpha emitters. Their statistical analyses and computer simulations of how galaxies cluster led them to the conclusion they first reported in the Dec. 10, 2007, issue of Astrophysical Journal: Lyman alpha emitters are the ancestors of spiral galaxies.

“We knew by our understanding of cosmological theory that spiral galaxies had to evolve from low-mass galaxies such as these,” Gawiser said. “The challenge was to actually find them. We’d seen other early universe galaxies, but they were bigger and destined to evolve into elliptical galaxies, not spirals.”

The astronomers undertook four types of observations to find and characterize the objects they were seeking. They performed the first step – actually finding the Lyman alpha-emitting galaxies amid all the visible objects of deep space – using the Blanco four-meter telescope at the NSF Cerro Tololo Inter-American Observatory in Chile. To measure their distance, they used the Magellan Telescope at Las Campanas Observatory, also in Chile, to measure redshift – an effect that shows how fast an object is receding from view due to a rapidly expanding universe. (The redshift at which they studied these galaxies is 3.1.) To determine how many stars are in the galaxies, they used the NASA Spitzer Space Telescope’s Infrared Array Camera. And to determine how big the galaxies are, they used the NASA Hubble Space Telescope’s Advanced Camera for Surveys.

“Astronomy has long used a model where big surveys are followed by detailed studies of the interesting objects they find,” said Nigel Sharp, program officer in NSF’s Division of Astronomical Sciences. “This work nicely couples the large area, wide-field view of our ground-based telescope with the sharp focus of the Hubble, to probe to the faintest light levels. This team has come the closest yet to finding young galaxies that resemble our own Milky Way in its infancy.” 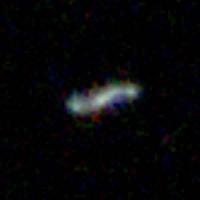 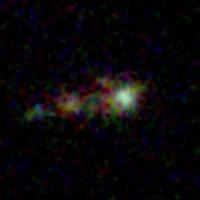