Scientists expect the future climate to become warmer, and that this will apply to the Arctic in particular. Here the temperature is expected to increase considerably more than the average on Earth, according to the Intergovernmental Panel on Climate Change average scenario (A1B).

What will this mean for Greenland? A very significant change will be the emergence of forests, where there are currently only four species of trees and large bushes indigenous to Greenland – and they only grow in small areas in the south.

An international research group including Professor of Biology Jens-Christian Svenning, Aarhus University, has analysed which species will be able to grow in the climate expected in Greenland in 2100. The analysis shows that a majority of 44 relevant species of North American and European trees and bushes will be able to grow in Greenland in the future.

In fact, the analysis points to the fact that a considerable number of species would already be able to grow in Greenland today. This is supported by actual experiments, where various species of trees have been planted in Greenland, including Siberian larch, white spruce, lodgepole pine and Eastern balsam poplar.

By the end of the century, a key species like the Arctic dwarf birch will probably be able to find suitable habitats in most areas of Greenland that are currently ice-free, far beyond its current distribution. Here we are talking about more than 400,000 square kilometres, or an area almost the size of Sweden.

The researchers conclude that southern Greenland and the area around Kangerlussuaq (Søndre Strømfjord) already have the potential to become much greener, with a forest flora corresponding to that occurring during former interglacial periods. With the expected climate change by 2100, scientists expect that such flora should be able to grow in large parts of the ice-free areas in the southern half of Greenland.

“In other words, Greenland has the potential to become a lot greener,” says Professor Svenning. The new opportunities for trees and bushes may oust Arctic animals and plants, but could also be beneficial to the Greenlanders.

“Forests like the coastal coniferous forests in today’s Alaska and western Canada will be able to thrive in fairly large parts of Greenland, with trees such as Sitka spruce and lodgepole pine. This will provide new opportunities for the population of Greenland. For example, we see that people use wood wherever there is forest. This could also create new opportunities for activities such as hunting and the commercial exploitation of berries. Forest and scrub will also reduce erosion and affect water run-off,” says Professor Svenning.

Why are the trees not already in place in Greenland? Partly because most trees only spread slowly by themselves, but also because Greenland is very isolated. The researchers’ models show that it will take more than 2000 years for Greenland’s indigenous species of trees to spread to all those areas of the country that will have a suitable climate by 2100.

In Greenland, some species arrived relatively quickly after the last Ice Age, while other species that rely on dispersal by birds or wind first arrived a couple of thousand years later. However, the researchers’ analysis shows that most plants have not yet utilised the Greenlandic countryside following the last Ice Age, and that the man-made climate change will rapidly create further opportunities for the plants. Taking advantage of this will be a slow process on their own, however.

Humans will play a deciding role

Professor Svenning indicates that humans will play a crucial role when trees and bushes naturally spread so slowly.

“People often plant utility and ornamental plants where they can grow. I believe it lies in our human nature. Such plantings could have a huge impact on the Greenlandic countryside of the future as a source of dissemination. This certainly has positive aspects.

But it would also be wise to be cautious, and thereby avoid some of the problems we’ve seen at our latitudes with invasive species such as giant hogweed and rugosa rose. The Greenlandic countryside will be far more susceptible to introduced species in future than it is today. So if importing and planting species takes place without any control, this could lead to nature developing in a very chaotic way, reminiscent of the Klondike,” warns Professor Svenning.

The work to implement the analyses was carried out by Signe Normand. She was educated at Aarhus University, and is returning in February 2014 to take up a position as assistant professor without a fixed term. She is currently working at the Swiss Federal Research Institute for Forest, Snow and Landscape (WSL).

Photo 1: On a picnic in Greenland
Forest planted in southern Greenland (Qanassiassat) from 1953 onwards. With the expected climate change by 2100, scientists expect that forests of this kind will be able to grow in large parts of the current ice-free areas in the southern half of Greenland. Photo: Anders Ræbild.

Photo 4: Coastal forest in Alaska
Tongass National Forest, Alaska. The researchers predict that forests of this type will be able to grow in the southern parts of Greenland in the future. Photo: John Schoen, Anchorage.

Photo 5: JCS
Professor Jens-Christian Svenning in Grand Teton National Park, Wyoming, USA. Engelmann spruce can be seen in the background – one of the species that has been planted successfully in Greenland. According to the researchers’ models, they will be able to thrive in large parts of southern Greenland in a future warmer climate. Photo: Else Magård, Aarhus University.

Journal
Philosophical Transactions of the Royal Society of London (B ) 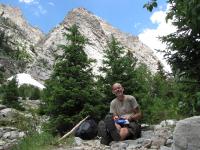