LOS ANGELES — Concerns about climate change and its impact on the world around us are growing daily. New scientific studies at the La Brea Tar Pits are probing the link between climate warming and the evolution of Ice Age predators, attempting to predict how animals will respond to climate change today.

The La Brea Tar Pits are famous for the amazing array of Ice Age fossils found there, such as ground sloths, mammoths, and predators like saber-toothed cats and powerful dire wolves. But the climate during the end of the Ice Age (50,000-11,000 years ago) was unstable, with rapid warming and cooling. New research reported here has documented the impact of this climate change on La Brea predators for the first time.

After the end of the last Ice Age, La Brea dire wolves became smaller and more graceful, adapting to take smaller prey as glaciers receded and climate warmed. This rapidly changing climate drove change in saber-toothed cats as well. "Saber-toothed cats show a clear correlation between climate and shape. Cats living after the end of the Ice Age are larger, and adapted to taking larger prey," said Julie Meachen of Des Moines University, lead author on the sabertooth study (Journal of Evolutionary Biology, 2014).

The two scientists discuss their work in a video here: http://www.youtube.com/watch?v=jK_DKSNbgR4&feature=youtu.be

"We can see animals adapting to a warming climate at La Brea," said O'Keefe. "Then humans show up and all the big ones disappear. We haven't been able to establish causality there yet. But we are working on it."

The emerging links between climate change and evolution needs further study. There are many unanswered questions; such as why predators change in the ways that they do, the importance of factors other than climate, and whether the arrival of humans played a role in the mass extinction at the end of the Ice Age. "There is much work to be done on the specimens from the tar pits. We are working actively to bring together the researchers and resources needed to expand on these discoveries," says John Harris, chief curator at the Page Museum. "Climate change is a pressing issue for all of us, and we must take advantage of what Rancho La Brea can teach us about how ecosystems react to it."

Palaeontologia Electronica was the first peer-reviewed online paleontology journal in the world and has been in publication for 17 years. On April 9, visit palaeo-electronica.org/content/2014/723-canis-dirus-craniometrics

About the Natural History Family of Museums

The Natural History Family of Museums includes the NHM, the Page Museum at the La Brea Tar Pits (Hancock Park/Mid-Wilshire), and the William S. Hart Park and Museum (Newhall, California). The Family of Museums serves more than one million families and visitors annually, and is a national leader in research, exhibitions and education.

About the Page Museum at the La Brea Tar Pits

The Page Museum at the La Brea Tar Pits is located at one of the world's most famous fossil localities. The Museum displays Ice Age fossils — including saber-toothed cats, dire wolves, and mammoths, and also holds one of the richest and most well-preserved fossil insect collections from 10,000 to 60,000 year-old asphalt deposits. For more information, call (323) 857-6300 or visit http://www.tarpits.org. 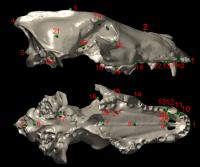