Australia has a bunch of kangaroo species, Madagascar has multiple species of lemurs, the Galapagos Islands have boulder-sized tortoises--islands get lots of cool animals. That's because when animals are isolated on islands, they can evolve into strange new species found nowhere else on Earth. But what's the cut-off--how small can an island be and still support the evolution of multiple new species from a single common ancestor? A team of mammalogists just discovered that four species of mice evolved from one common ancestor on Connecticut-sized Mindoro Island in the Philippines, making it the smallest known island where one kind of mammal has branched out into many more.

"The single most remarkable thing about planet Earth is there are so many species here, so much biodiversity. We take it for granted, but holy cow, there's a whole lot of stuff out there--how did it get here?" says Lawrence Heaney, Negaunee Curator of Mammals at Chicago's Field Museum and co-lead author of a recent paper in the Journal of Biogeography. "This is one of the few papers ever written to look at whether there's a limit to how small an island can be for species diversification to occur, and it's the only one looking at it in mammals. Mindoro is by far the smallest island on which we've seen this happen."

According to Heaney, this quest to find the smallest island that can support new mammals started with a thought experiment posed in 1980. Michael Soulé, a conservation biologist, wondered if new animal species could diversify in an area the size of the largest of existing national parks. Diversification means that multiple species arise from one parent species. "There are many islands that have species that arrived from somewhere else and that subsequently changed into something distinctive. Many of these islands are much smaller than Mindoro," explains Heaney. "Rather, the key to this study is whether a single species that arrived from somewhere else has produced multiple species that all evolved within the given island from the single ancestral species. It is the issue of an increase in the number of species within the island, by evolution within the island."

Previously, the smallest island where scientists knew mammal species had diversified was Luzon, the largest island in the Philippines. But Luzon is one of the biggest islands in the world, about the size of Virginia. Heaney and his team wanted to see if they could do one better--"We looked at a map and said, okay, where's there a smaller island where diversification may have occurred?"

The scientists didn't have to look far--they turned to Mindoro, a small island just across a channel from Luzon. Mindoro is a tenth the size of Luzon--it's about two-thirds the size of Connecticut. Heaney's colleague Danny Balete, now deceased, led the fieldwork missions on Mindoro for four field seasons, searching for the island's mammals.

This is where the worm-eating mice come in.

When the team analyzed the DNA of Mindoro's earthworm mice, they found that the mice belonged to four separate species, three of which were new to science. And all four of the species, Heaney says, evolved on Mindoro from a common ancestor.

"The results are unambiguous--we've got four species of forest mice on Mindoro from one colonization event from Luzon about 2.8 million years ago," says Heaney. "And three of those four mouse species are found on their own separate mountains."

Chris Kyriazis, Heaney's former undergraduate student and co-first author on the paper, led the DNA analysis from the Field Museum's Pritzker DNA Lab. "By examining genetic variation across these populations, we were able to confirm not only that these mice originated from a single colonist on Mindoro, but also that they are distinctive enough to be considered different species. The fact that variation in external measurements show the same pattern only strengthens the case," says Kyriazis, who is now pursuing his PhD in biology at UCLA.

The fact that the four mouse species evolved on this little island means that there's a new answer to the question posed by Soulé in 1980: mammals can diversify in an area as small as Mindoro. And since Mindoro is the same size as Yellowstone National Park, that means that new mammal species can evolve from one ancestor in areas as small as at least some large wildlife preserves.

The implications of Heaney and Kyriazis's discovery goes far beyond a thought experiment, though: it gives scientists a valuable tool for planning conservation spaces.

"This study changes how I think about conservation," says Heaney. "When we think about how to design protected areas, we need to think about the topography of the Earth, not just a flat map. The fact that these mice evolved on their own separate mountains within a limited geographic area tells us that mountains are important."

And figuring out how to plan protected wildlife spaces is crucial for preserving biodiversity. "As human population continues to expand, what's going to happen to everything else? How will new species be able to evolve?" asks Heaney. "This project is a step forward in being able to answer that."

This project was supported by a grant from the National Geographic Society. It was contributed to by scientists from the Field Museum, Florida State University, and the Natural History Museum of Utah. 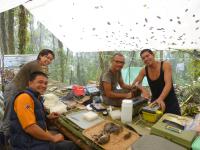