PULLMAN, Wash.--Climate change may be responsible for the abrupt collapse of civilization on the fringes of the Tibetan Plateau around 2000 B.C.

WSU archaeologist Jade D'Alpoim Guedes and an international team of researchers found that cooling global temperatures at the end of the Holocene Climatic Optimum, a 4,000 year period of warm weather, would have made it impossible for ancient people on the Tibetan Plateau to cultivate millet, their primary food source.

Guedes' team's research recently was published online in the Proceedings of the National Academy of Sciences. Her results provide the first convincing explanation for why the area's original inhabitants either left or so abruptly changed their lifestyles.

They also help explain the success of farmers who practiced wheat and barley agriculture in the region 300 years later.

Unlike millet, wheat and barley have high frost tolerance and a low heat requirement, making them ideally suited for the high altitudes and cold weather of eastern Tibet. Guedes argues this made the two crops an important facet of subsistence immediately after their introduction around 1700 B.C.

"Wheat and barley came in at the opportune moment, right when millets were losing their ability to be grown on the Tibetan Plateau," Guedes said. "It was a really exciting pattern to notice. The introduction of wheat and barley really enabled Tibetan culture to take the form it has today, and their unique growth patterns may have played a crucial rule in the spread of these crops as staples across the vast region of East Asia."

One offshoot of the research: The ancient millet seeds that fell out of cultivation on the Tibetan Plateau as the climate got colder might soon be useful again as the climate warms up.

"Right now, these millets have almost become forgotten crops," Guedes said. "But due to their heat tolerance and high nutritional value, they may be once again be useful resources for a warmer future."

At Ashaonao, Haimenkou, and other archeological sites in the Tibetan highlands, researchers for years had noticed a growing trend. An abundance of ancient wheat and barley seeds found at the sites suggested the crops rapidly replaced millet as the staple food source of the region during the second millennium BCE.

The findings were puzzling considering that the scientific consensus of the time was the region's climate would have actually favored millet, due to its shorter growing season, over wheat or barley.

The conundrum intrigued Guedes so she dove into the agronomy literature to investigate. She found agronomists tended to use a different measurement than archaeologists to determine whether crops can grow in cold, high altitude environments like the Tibetan Plateau. They used total growing degree days or the accumulated amount of heat plants need over their lifetime rather than the length of a growing season.

"My colleagues and I created a new model based off what we found in the literature," Guedes said. "It revealed that global cooling would have made it impossible to grow millet in the Eastern Tibetan Highlands at this time but would have been amenable to growing wheat and barley. Our work turned over previous assumptions and explained why millet is no longer a staple crop in the area after 2000 BCE."

Guedes' work points to climate cooling as the culprit behind the collapse of early civilization on the Tibetan Plateau. Ironically, the region is today one of the areas experiencing the most rapid climate warming on the planet. There are some areas in the southeastern plateau where temperatures are 6 degrees Celsius higher than they were 200 years ago.

Rapid temperature increase is making it difficult for the region's inhabitants to raise and breed yaks, a staple form of subsistence in the central Asian highlands, and grow cold weather crops, once again endangering their survival.

"So now we have a complete reversal and climate warming is having a big impact on the livelihood of smaller farmers on the Tibetan Plateau," Guedes said.

Closing the case on an ancient archeological mystery

Journal
Proceedings of the National Academy of Sciences
Funder
, , , 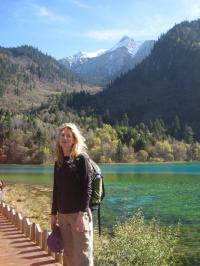