Chronic caloric restriction consists in eating a reduced but balanced diet from early adult life onward. Previous research, into macaques in particular (which have an average lifespan of forty years), had already demonstrated its beneficial effect on the incidence of age-related pathologies. However, its positive effect on the lifespan of primates remained controversial. To study this question, the researchers focused on the grey mouse lemur, a small primate whose lifespan (around twelves years) makes it a very good model for the study of aging. Moreover, this small lemurid has many physiological similarities with humans.

The scientists exposed a group of mouse lemurs to moderate chronic caloric restriction (30% fewer calories than their peers consuming a normal diet) from the outset of early adulthood (Restrikal cohort, see visuals below). They then considered their survival data as well as possible age-related alterations. The first result, after the experiment had been running for ten years, was that in comparison to the animals in the control group, the lifespan of those subject to caloric restriction increased by almost 50%. More specifically, their median survival is 9.6 years (compared to 6.4 years for the mouse lemurs in the control group). And, for the first time among primates, the scientists observed that the maximum lifespan had increased: almost a third of the calorie-restricted animals were still alive when the last animal in the control group died at the aged of 11.3 years.

This beneficial effect was accompanied by the preservation of motor capacities, without any alteration to cognitive performance, and a reduction in the incidence of pathologies usually associated with aging, such as cancer or diabetes. The calorie-restricted mouse lemurs present the morphological characteristics of a younger animal. Furthermore, brain imaging data for these very elderly animals shows a slight loss of grey matter (neuronal cell bodies), an effect that the researchers have not yet explained, as well as significantly slowed atrophy of white matter (the neuronal fibers connecting different areas of the brain). 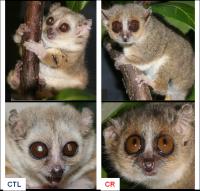