In the eyes of a female poison-dart frog, a red male isn't much brighter than a green one. This does not however mean that the mating behavior of the green and red variants of the same species of frog is exactly the same. A study in Springer's journal Behavioral Ecology and Sociobiology, led by Beatriz Willink of the Universidad de Costa Rica in Costa Rica, sheds light on these findings.

The bright colors of poison-dart frogs serve not only to attract potential mates, but also to warn possible predators such as birds that these amphibians are poisonous. Different color variants within the same species occur, such as in the granular poison frog (Oophaga granulifera) of the southwestern lowlands of Costa Rica, where yellow and green color morphs have evolved from red ancestors.

Willink and her colleagues wanted to test if the green variants of the granular poison frog were more or less conspicuous to potential mates and predators than red ones of the same species. Therefore, they measured how the skin of the frogs contrasted with their natural background. This was done because dorsal brightness is known to influence female preferences in at least one poison frog species. The calling activity of 12 red and 10 green male frogs was also noted to determine if green males adjust their display behavior according to the availability of potential mates.

The results show that the green frogs, despite being less visible in some cases, may appear as bright as red frogs to members of their own species - but not to birds - when they are viewed on dark backgrounds.

Green frogs therefore seem to adjust their sexual behavior accordingly: They can deliver relatively conspicuous signals to females while being less conspicuous to potential predators. The researchers found that green males called less frequently than red males when advertising to distant females. However, their calling activity dramatically increased when a female was near and they became as vocal as red males. In the right context, when mating opportunity is certain, green males appear to trade-off the risk of predation for the mate-securing benefits of bold behavior.

"Our results support the notion that populations of phenotypically or observably different divergent species may use different solutions to the trade-off between natural and sexual selection, by adjusting the place and time of displays to risks and opportunities," says Willink. "In poison frogs this may have contributed to the dramatic variation in color pattern conspicuousness observed across species."

The full-text article, photos and a video clip are available to journalists on request. 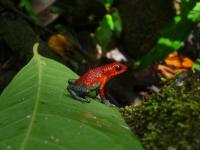