When sailing along on the seas and you suddenly spot a porpoise's fin in the distance, chances are that you have only encountered a single animal. Porpoises are most often seen alone, but new research now suggests that they also roam in groups - and even enter into a sophisticated collaboration when hunting.

Drone footage has revealed group hunting among porpoises coming together to hunt schools of fish.

The research team has recorded almost 44 hours of drone footage from the waters around Funen, corresponding to 159 hunting sequences. In 95 of these, between two and six adult porpoises participated. The researchers expected to see the porpoises hunting alone. And if it turned out that several porpoises were in fact hunting together, the researchers expected that it would be an unstructured hunt without no cooperation whatsoever between the individual animals.

The footage also shows porpoises hunting alone. According to the researchers, solitary hunters are less successful at foraging food than the porpoises that hunt in groups.

In order to hunt in the observed way, the porpoises must be able to share information and coordinate their actions. They take on different roles during the hunt, and the drone footage has revealed six different roles:

Each porpoise can take on different roles during the hunt, and the result of the collaboration is that the school of fish eventually becomes so confused and exhausted that the individual hunters are able to capture the fish that stray away from the school.

There are several different types of group hunting in the animal kingdom. The form observed can be called a form of collaborative hunting, and it is more sophisticated than the form called cooperative hunting, explains Sara Torres Ortiz.

Animals such as chimpanzees and raves exhibit cooperative hunting abilities. During this form of hunting, several hunters gather without taking on different roles.

The collaborative hunt, in which the individual hunters take on different roles, is more rare - or, rather: It is not observed very often because it is inherently difficult to follow. The use of drones opens up new possibilities of following a herd of animals from above - like this porpoise study - and this may in the future contribute with new and improved knowledge about hunting animals.

Until now, collaborative hunting has been scientifically described in animals such as lions, fossas, wolves and jackals. Wolves and jackals divide the hunting pack into two teams, where one team lurks while the other team drives the prey forward. Among lions, the strategy is for the entire pack to approach the prey from different directions, after which some hunters lie down to hide while the rest of the group drives the prey towards them.

What other surprises await?

Does the hunting group consist of the same individuals every time, or is it randomly composed? How often do participants change roles? And do porpoises enter into other social relations with each other?

- Drones have truly changed the possibilities of studying marine animals, and it will be exciting to see if they can surprise us again, says Sara Torres Ortiz.

The study is published in the Canadian Journal of Zoology.

The work is supported by SDU's Lighthouse Initiative, the Swedish Royal Academy of Sciences, the Royal Physiographic Society in Lund and the Lars Hierta Memorial Foundation. 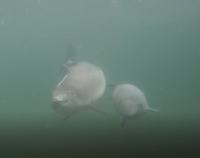