An analysis of aging in Down syndrome and hypercholesterolemia mouse models has suggested that a Down syndrome-associated gene, DSCR-1, protects against abnormal vascularization of the cornea and associated corneal opacity (blindness) by suppressing oxidized LDL cholesterol production and new downstream angiogenic signaling in patients with chronic high cholesterol. Epidemiological data suggests that, while the neurological pathology of Down syndrome patients worsens with age, they are also less susceptible to age-related vascular diseases. The responsible genes and mechanisms have not yet been clarified, but DSCR-1 appears to be a strong candidate for a wide range of vascular diseases, such as atherosclerosis and hypertension.

Down syndrome, the most common congenital disease in human genetics, has seen dramatic increases in longevity with advances in modern medicine. Unfortunately, new problems associated with this increased longevity have emerged, such early Alzheimer's, reduced vision, and muscle weakness. However, unlike the nervous system, the vascular system in Down syndrome patients is very resistant to aging pathologies like solid cancers (as opposed to blood cancers such as leukemia), atherosclerosis, hypertension, and Kawasaki disease--a systemic vasculitis that some researchers say has a connection to SARS-CoV-2, the virus that causes COVID-19. It has therefore become important to conduct comprehensive genomic and pathological analyses, including secondary analyses of gene expression on Down syndrome chromosomes and changes due to different chromosome numbers, to determine its cause.

Down syndrome occurs when there is an extra chromosome 21 instead of the usual two. DSCR-1 is located on chromosome 21 and suppresses signals related to angiogenesis. A research group based in Kumamoto University (Japan) crossed hypercholesterolemia (ApoE-deficient) mice with those that highly expressed DSCR-1 and those that were DSCR-1-deficient to analyze the effects of aging. By examining the pathological signals produced by high cholesterol, they hoped to determine why corneal opacity (prominent in ApoE deficiency) is protected against by high DSCR-1 expression and exacerbated by DSCR-1 deficiency.

DSCR-1-deficient mice showed slight age-related corneal opacity, which was dramatically exacerbated when crossed with ApoE-deficient mice, and increased corneal inflammation. DSCR-1 protects postnatal homeostasis based on its inhibitory and antioxidant effects on the NFAT transcription factor--a major factor in the development of Down syndrome. DSCR-1 deficiency results in the abnormal activation of NFAT and the signal transduction function of SDF-1 and its receptor CXCR4, which has an angiogenic effect in peripheral blood vessels. This results in increased angiogenesis and lymphangiogenesis in the corneal area.

Researchers further clarified that DSCR-1 deficiency increases oxidized LDL cholesterol which, in turn, increases SDF-1 production in the endothelium and the production of the angiogenesis-promoting factor VEGF in infiltrating macrophages, thus resulting in pathological angiogenesis (and clouding) in the cornea. This condition was greatly alleviated by the administration of antibodies that neutralize the function of SDF-1.

"This study shows that, in addition to suppressing cancer growth and cytokine storms in sepsis, DSCR-1 may have a protective effect on pathological angiogenesis under high cholesterol conditions," said study leader, Professor Takashi Minami. "We have also obtained data on NFAT/DSCR-1 signaling in patients with human corneal lesions, suggesting that drugs that block NFAT and its downstream SDF-1 function may be effective in protecting against age-related vascular disease."

This research was posted online in ATVB (Arteriosclerosis, Thrombosis, and Vascular Biology) on 13 August 2020. 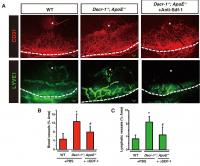