Soon in virtually every hospital it will be possible to identify the bacterial species responsible for an infection developing in a patient in a matter of just a few minutes. A new, easy-to-adapt and inexpensive analytical procedure has been developed by researchers from the Institute of Physical Chemistry of the Polish Academy of Sciences in Warsaw. The main role is played by innovative bioconjugates - luminescent, magnetic microparticles coated with appropriately selected bacteriophages.

When a patient is admitted to hospital with advanced bacterial infection, such as sepsis, time becomes crucial. The sooner it is possible to determine the species of the intruder ravaging the body, the greater the chance of successful treatment. Meanwhile, commonly used analytical methods still require the multiplication of bacteria (which often takes several days) or specialized equipment available in only a few laboratories. The identification of the bacteria can, however, be carried out in almost any hospital analysis laboratory and the waiting time for the result reduced to minutes, according to researchers from the Institute of Physical Chemistry of the Polish Academy of Sciences (IPC PAS) in Warsaw in the pages of the respected scientific journal Bioconjugate Chemistry.

Before starting the work on the new analytical technique, researchers from the IPC PAS assumed that it should allow for significantly faster identification of bacteria than existing methods and be easy to introduce in a large number of hospital laboratories, but without any sacrifice of measurement accuracy. An additional requirement was that the analysis should be inexpensive.

"Faster, better, cheaper - we managed to achieve all of these objectives. This can be seen by any interested party as, in full awareness, we relinquished patent protection," says Dr. Jan Paczesny (IPC PAS), who led the research project funded by a grant from the Polish National Science Centre.

The detection device in the new technique for identifying bacteria is a flow cytometer. Despite the seemingly formidable name it is quite a simple and relatively inexpensive piece of equipment, available in many hospitals, where it is used commonly in blood tests. In the cytometer the sample is passed through a nozzle from which the stream that flows is so narrow that all the larger particles in the solution, particularly cells, have to flow one by one. The stream is lit by lasers and surrounded by detectors that record the light reflected from individual particles, scattered to the sides and emitted by them.

The main problem was to develop a method for labelling the bacteria to be easy to intercept them in the test sample and identify them with great certainty with the aid of the cytometer. To do this, researchers decided to construct special bioconjugates, i.e. complexes formed by the combination of microparticles with biomolecules. The biological element was a bacteriophage, which is a virus infecting a particular species of bacteria (the IPC PAS experimenters used the T4 bacteriophage, attacking Escherichia coli bacteria). The bacteriophages were coupled with microparticles capable of emitting light that could be easily registered on the cytometer and exhibiting magnetic properties. The latter was essential, because it made it possible to separate the bioconjugates from other particles in the sample with a simple magnet.

"We started by searching for inexpensive, commercially available microparticles that met our requirements. It turned out that appropriate particles were already available on the market - and exactly the ones we were looking for! Their surface was covered with just those chemical functional groups we needed to place virtually any type of bacteriophage on them," explains PhD student Marta Janczuk-Richter from the group of Prof. Joanna Niedziolka-Jonsson.

The researchers combined the purchased microspheres with bacteriophages using a compound from the carbodiimide group known as EDC (this substance is used by many chemists to bind together different particles). Images obtained with confocal microscopy confirmed that in the new bioconjugates usually two or three bacteriophages adhered to each microparticle. Therefore, the world's first bioconjugates with triple functions were obtained: binding only to one species of bacteria, responsive to the magnetic field and capable of glowing (fluorescent).

The procedure for identifying bacteria using such constructed bioconjugates is simple. The sample - it can be a physiological fluid obtained from the patient, or a food product, e.g. carrot juice - is diluted and then a small amount of previously prepared bioconjugates is added to the solution. After this, it takes a short while for the bioconjugates to attach to the bacteria. Next, a magnet is applied to the test-tube with the liquid and all bioconjugates are attracted, including those with the attached bacteria. After pouring out the remainder of the sample and re-dilution of the separated precipitate, the solution is passed through the cytometer.

"Measurement in the cytometer typically takes about a minute. The result is a graph on which we see how all the bioconjugates scatter the incident light and emit the fluorescence. Since we know the signal we should obtain from pure bioconjugates, i.e. those without bacteria, we can easily determine whether the sample contains the bacteria we are looking for, and if so, in what concentration," says PhD student ?ukasz Richter from the group of Prof. Robert Holyst.

Tests at the IPC PAS have shown that usually several bioconjugates attach to each bacteria. Theoretically, it would thus be possible to detect even a single bacterium. In practice, however, certain limitations arise from the properties of the microparticles and the characteristics of the measuring apparatus. Pure bioconjugates may in fact clump together into larger clusters, which generate a similar signal in the cytometer as single bioconjugates with attached bacteria.

Bioconjugates with one type of bacteriophages detect only one species of bacteria. However, due to the ease of preparation of bioconjugates, interested hospital laboratories could, on their own and without any major problems, prepare a dozen or even several dozen types of potentially useful bioconjugates, each of them with bacteriophages infecting different species of bacteria. In the case of sepsis, which is caused in most cases by only over a dozen species of bacteria, carrying out the identification would then require the simultaneous performance of at most a dozen tests. The entire procedure should not take an efficient laboratory technician more than an hour. 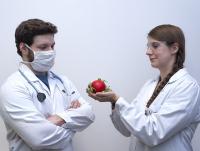