The marine worm Ramisyllis multicaudata, which lives within the internal canals of a sponge, is one of only two such species possessing a branching body, with one head and multiple posterior ends. An international research team led by the Universities of Göttingen and Madrid is the first to describe the internal anatomy of this intriguing animal. The researchers discovered that the complex body of this worm spreads extensively in the canals of their host sponges. In addition, they describe the anatomical details and nervous system of its unusual reproductive units, the stolons, which form their own brain when detached for fertilization, allowing them to navigate their environment. The results were published in the Journal of Morphology.

The research team found the host sponges and their guest worms in a remote area in Darwin, Australia, where these animals live. They collected samples, some of which are now located in the collections of the Biodiversity Museum at the University of Göttingen. For their analysis, they combined techniques such as histology, electronic optical microscopy, immunohistochemistry, confocal laser microscopy, and X-ray computed microtomography. This made it possible to obtain three-dimensional images both of the worms' different internal organs and of the interior of the sponges that they inhabit. The scientists show that when the body of these animals divides, so do all their internal organs, something that has never been observed before.

Furthermore, the three-dimensional models developed during this research have made it possible to find a new anatomical structure exclusive to these animals, which is formed by muscular bridges that cross between the different organs whenever their body has to form a new branch. These muscular bridges are essential because they confirm that the bifurcation process does not occur in the early stages of life, but once the worms are adults and then throughout their lives. In addition, researchers propose that this unique "fingerprint" of muscle bridges makes it theoretically possible to distinguish the original branch from the new one in each bifurcation of the complex body network.

In addition, this new study investigates the anatomy of the reproductive units (stolons) that develop in the posterior ends of the body when these animals are about to reproduce, and that are characteristic of the family to which they belong (Syllidae). The results show that these stolons form a new brain and have their own eyes. This allows them to navigate their environment when they are detached from the body for fertilization. This brain is connected to the rest of the nervous system by a ring of nerves that surrounds the intestine.

"Our research solves some of the puzzles that these curious animals have posed ever since the first branched annelid was discovered at the end of the 19th century," explains senior author Dr Maite Aguado, University of Göttingen. "However, there is still a long way to go to fully understand how these fascinating animals live in the wild. For example, this study has concluded that the intestine of these animals could be functional, yet no trace of food has ever been seen inside them and so it is still a mystery how they can feed their huge branched bodies. Other questions raised in this study are how blood circulation and nerve impulses are affected by the branches of the body." This research lays the foundations for understanding how these creatures live and how their incredible branched body came to evolve. 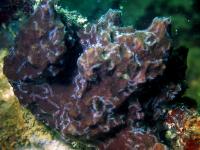 The host sponge in which the branching worm lives 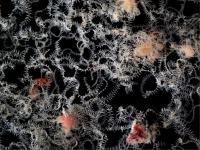