Researchers from Slovenia and South Africa have discovered heterospecific mating in Nephila spiders, and have published their findings on 15th November 2016 in the journal Scientific Reports. Heterospecific mating means sexual encounters between males and females of different species. Such sexual interactions in arachnids are rare, and generally not expected in cannibalistic animals such as spiders.

Shakira Quiñones, a PhD student at the EZ Lab within Research Centre of the Slovenian Academy of Sciences and Arts (ZRC SAZU), and coauthors investigated sexual interactions among four closely related and syntopical African golden orbweb spiders, Nephila inaurata, N. fenestrata, N. komaci, and N. senegalensis. Giant female Nephila spiders are known to cohabit with multiple tiny males, and females often attack and devour their suitors. However, during prior expeditions to South Africa, Matjaž Kuntner, the senior author on this paper, noted that the numerous males in a single female web are not always of the same species. Now, the research team detected random species association of males with females in nature and no preference for conspecific females in subsequent laboratory trials.

Heterospecific mating is not uncommon in animals but is not expected in sexually size dimorphic spiders, where cannibalism can function as a conspecific mate-check. "Our results suggest that heterospecific interactions of Nephila males may involve several mistakes in locating, courting to, and mating with a "correct" female." said Shakira Quiñones, the first author on the study.

Quiñones and coauthors suggest that heterospecific interactions could play an important role in determining the community structure of Nephila, possibly through reproductive interference. These interactions may be particularly costly to the rarest species, Nephila komaci, that was only described in 2009. 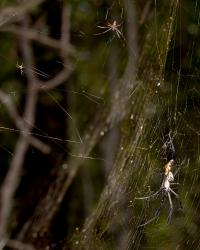