MIAMI - A new study led by scientists at the University of Miami Rosenstiel School of Marine and Atmospheric Science suggests that over the next century recruitment of new corals could drop by 73 percent, as rising CO2 levels turn the oceans more acidic. The research findings reveal a new danger to the already threatened Caribbean and Florida reef Elkhorn corals.

"Ocean acidification is widely viewed as an emerging threat to coral reefs," said Rosenstiel School graduate student Rebecca Albright. "Our study is one of the first to document the impacts of ocean acidification on coral recruitment."

Elkhorn coral, known as Acropora palmata, is recognized as a critical reef-building species that once dominated tropical coral reef ecosystems. In 2006, Elkhorn was included on the U.S. Endangered Species List largely due to severe population declines over the past several decades.

The absorption of carbon dioxide by seawater, which results in a decline in pH level, is termed ocean acidification. The increased acidity in the seawater is felt throughout the marine food web as calcifying organisms, such as corals, oysters and sea urchins, find it more difficult to build their shells and skeletons making them more susceptible to predation and damage.

Recent studies, such as this one conducted by Albright and colleagues, are beginning to reveal how ocean acidification affects non-calcifying stages of marine organisms, such as reproduction.

"Reproductive failure of young coral species is an increasing concern since reefs are already highly stressed from bleaching, hurricanes, disease and poor water quality," said Chris Langdon, associate professor at the Rosenstiel School and co-author of the study.

The paper, "Ocean acidification compromises recruitment success of the threatened Caribbean coral Acropora palmata," will be published in the Nov. 9 issue of Proceedings of the National Academy of Sciences (PNAS). The paper's co-authors include, Benjamin Mason of the UM Rosenstiel School and Margaret Miller of the National Oceanic and Atmospheric Administration Fisheries Service.

The University of Miami is the largest private research institution in the southeastern United States. The University's mission is to provide quality education, attract and retain outstanding students, support the faculty and their research, and build an endowment for University initiatives. Founded in the 1940's, the Rosenstiel School of Marine & Atmospheric Science has grown into one of the world's premier marine and atmospheric research institutions. Offering dynamic interdisciplinary academics, the Rosenstiel School is dedicated to helping communities to better understand the planet, participating in the establishment of environmental policies, and aiding in the improvement of society and quality of life. For more information, please visit www.rsmas.miami.edu. 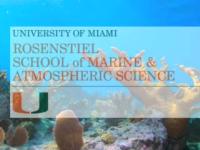