Between the arrival of pearl divers and war brides - long after Japanese performers toured Australia 150 years ago - an untold chapter of World War Two history has emerged in a new study of wartime art made by almost 5000 prisoners of war in Australia and New Zealand.

It gives a fascinating insight into the lives of these ethnic and part-Japanese PoWs and civilians, at a time of enforced detention at remote locations such as Cowra and Hay (NSW), Tatura in Victoria, Loveday and Woolenook camp (SA) and Featherston, Pahiatua and Somes Island in New Zealand.

"Australasian Japanese internment camps remain largely unheard of, and the art made by the internees has received no attention until the current research," they say in the new paper. "Although there were some very crudely made items made by the Japanese held in Australasia, many of the works are of surprising quality and suggest a level of artistic confidence and training."

Including the Cowra breakout and a standoff at the Featherston facility, the record of camp life focuses more on a narrative of violence, misunderstanding, racism, than the social history and isolating and traumatic experience of internment.

In the largely all-male camp environment, many of the works depict alluring female figures, with the cultural symbols of kimono, geisha and umbrella depicted in various ways.The paper outlines the stories of several such artworks, including the attached:

Editors - the images can be downloaded from the article, except Figure 3 which is privately owned and requires permission.

Images of captive torment in art 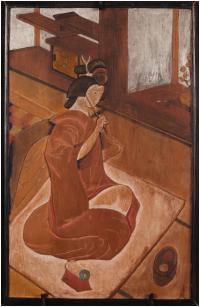