Although the giant panda is in practice a herbivore, its masticatory system functions differently from the other herbivores. Through the processes of natural selection, the giant panda's dietary preference has strongly impacted the evolution of its teeth and jaws. Researchers from the Institute of Dentistry at the University of Turku and the Biodiversity unit of the University of Turku together with researchers from the China Conservation and Research Center for Giant Panda (CCRCGP) have been the first in the world to solve the mystery of how the giant panda's special stomatognathic system functions.

The bamboo diet of the giant panda (Ailuropoda melanoleuca) has long been a mystery for researchers. The panda is in practice a herbivore, and its diet only consists of few dozen species of bamboo. Related to the consumption of bamboo, the giant panda has a special characteristic of peeling the green outer skin of all bamboo shoots, rich in abrasive and toxic compounds, by the highly adapted premolars.

Herbivores have usually evolved to have ridged molars that help them grind the plant material and jaws capable of moving sideways which is essential for grinding their food. Although the teeth of giant pandas have been studied extensively, until now, researchers have not paid attention to why the large canines of their upper jaw do not prevent the sideways movement of the lower jaw typical for herbivores - and also humans. The key to this has been the evolution of the temporomandibular joint and the premolar teeth.

Using modern 3D scanning methods, the research group studied the movement of the giant panda's jaw and the structure of its teeth and found the answer to the question that had puzzled researchers for over a century: how are giant pandas able to use bamboo as their diet. The solution was that the panda's temporomandibular joint has evolved to differ from that of e.g. brown bear and polar bear. In addition to the open-closed movement reminding that of a hinge, the joint also allows the jaw to be moved sideways, which is required to peel the bamboo. Interestingly, this movement isn't prevented by the large canines the male pandas need to fight.

- The necessity to ensure adequate nutrition has helped evolve the temporomandibular joint and the shape of the teeth to allow efficient peeling of the bamboo without without exposing the premolars to the attritive or other damaging effect of bamboo diet, explains Professor Pekka Vallittu from the Institute of Dentistry.

The evolution of the giant panda's masticatory system, as demonstrated in the study, allowed them to be the only large mammals to access an endless source of nutrition in the form of bamboo in the early Pleistocene.

- The premolars giant pandas use for peeling bamboo are unique among the family of bears and allow the removal of the poisonous green skin of the bamboo which also includes mineral crystals which would wear their teeth, says Professor Juha Varrela from the Institute of Dentistry.

The study of how the giant panda's masticatory system functions also helps to understand human's occlusion and its characteristics better.

- Whether giant pandas grind their teeth still remains to be seen, ruminates Vallittu.

- This newly published study is of great scientific significance because it solves the long-prevailing mystery of the ecological interrelationship between the pandas and the bamboo plants, says Professor Jukka Salo from the Biodiversity Unit of the University of Turku.

Salo has been an active participant in the panda project of the Finnish Ähtäri Zoo and the study of the panda habitat in the Qionglai Mountains in the Sichuan province of China. Professor of Environmental Sciences and Biodiversity Pekka Niemelä from the University of Turku has also studied pandas in the area for a long time. The University of Turku has lead four conservation projects in the panda habitat of Sichuan together with the State Forestry and Grassland Administration (SFGA) of China and the CCRCGP in 1998-2008. Two pandas were able to be transferred to Finland as the outcome of this collaboration, and the CCRCGP also participated in this project and will be participating in up-coming projects, too.

The research article was published in the international journal Scientific Reports: http://www.nature.com/articles/s41598-021-93808-2 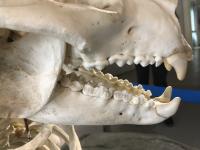 Skull of a giant panda 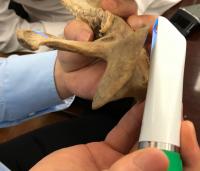