The residents of Longyearbyen, the largest town on the Norwegian arctic island archipelago of Svalbard, remember it as the week that the weather gods caused trouble.

Temperatures were ridiculously warm - and reached a maximum of nearly +8 degrees C in one location at a time when mean temperatures are normally -15 degrees C. It rained in record amounts.

Snow packs became so saturated that slushy snow avalanches from the mountains surrounding Longyearbyen covered roads and took out a major pedestrian bridge.

Snowy streets and the tundra were transformed into icy, rain-covered skating rinks that were difficult to navigate with snowmobiles. Flights were cancelled, the airport closed, and travel around town was tricky.

The situation was particularly problematic out on the tundra. Rain falling on snow can percolate to the base of a snowpack where it can pool at the soil surface and subsequently freeze.

That makes it impossible for grazing reindeer to get at their food, for example, and extreme warm spells can even affect temperatures in the permanently frozen ground found throughout the archipelago.

But the extreme event also offered an interdisciplinary group of scientists, from climatologists to biologists to snow geophysicists and structural engineers, a chance to document the event and learn from it. Their cross-disciplinary report, "Warmer and wetter winters: characteristics and implications of an extreme weather event in the High Arctic," was published on 20 November in Environmental Research Letters.

"We had a unique opportunity to document what happened, and we did," said Brage Bremset Hansen, the first author on the paper, and co-author Øystein Varpe. "This was a case study from one event...but since it was an extreme event, and with all of our contacts in the different disciplines, we were able to compile this information into one story, which is quite rare."

Hansen is a biologist at the Norwegian University of Science and Technology's Centre for Biodiversity Dynamics, and Varpe is an associate professor at the University Centre in Svalbard.

Just a 0.2 Percent Chance of Happening

Co-author Ketil Isaksen, a climatologist from the Norwegian Meteorological Institute, said that such an extreme event has a 500-year return period, which means that the probability of it happening in any one year is just 0.2 percent.

At the same time, climatologists say that Svalbard has seen the greatest increase in temperatures of any place in Europe over the last three decades.

And while no one can attribute the event directly to global warming, virtually all climate studies show that the High Arctic, including Svalbard, will become increasingly warmer and wetter over time.

"We expect this to be more likely to happen," Isaksen said.

As a biologist, Hansen was very interested in how the extreme weather would affect the archipelago's natural communities. Only four vertebrate species overwinter on Svalbard - the wild Svalbard reindeer (Rangifer tarandus platyrhynchus), the Svalbard rock ptarmigan (Lagopus muta hyperborea), and the sibling vole (Microtus levis), and one animal that eats them all, the arctic fox (Vulpes lagopus).

When Hansen and his colleagues compared summer population counts of reindeer after the January 2012 event to counts conducted during the previous summer, they found that the number of reindeer carcasses in many populations was among the highest ever recorded.

But it could have been worse, he said, in part because recent increases in summer temperatures have made for better foraging conditions for Svalbard reindeer overall.

"It wasn't like there were dead reindeer all over the tundra," he said. "If this had happened in the colder 1980s, it could have been much worse. ...They had a nice winter up to this event, which occurred rather late."

Hansen and colleagues have previously published research on the overwintering animal community on Svalbard, suggesting that such extreme events can affect all species. But what makes the new findings unique is the collaboration between different disciplines that enabled researchers to assemble a picture of what happened to Svalbard's physical environment, and to people living in the outposts of Longyearbyen and Ny-Ålesund, a tiny community with a winter population of about 30 people.

In Ny-Ålesund, for example, it rained nearly 100 mm in one day - which would be more typical of the Norwegian coastal town of Bergen, renowned for its heavy rains. That one-day amount represented a quarter of the precipitation that Ny-Ålesund typically gets in a year.

Isaksen documented a significant increase in ground temperatures in permafrost as deep as 5 metres below the surface as a result of the extreme warming. This temperature increase came on top of a decades-long larger trend of warming of the permafrost on Svalbard, the researchers said. Permafrost is permanently frozen ground that is found throughout the archipelago and the High Arctic. In regions in the Northern Hemisphere where permafrost is found, it occupies approximately 25% (23 million km²) of the land area.

And for Svalbard residents, who are some of the most northerly inhabitants on the globe, there were significant socioeconomic effects. During and after the event, it was difficult for snowmobiles to travel out on the tundra on the thick layer of ice, Varpe said.

This thick layer, averaging 15.3 cm, persisted out on the tundra well after the event was over, said Jack Kohler, senior research scientist, glaciology, at the Norwegian Polar Institute.

"The winter rain event leads to the ground-ice formation, and the ice lasts the remainder of the melt season, until it melts, and that is what I would call the significant happening," Kohler said. "The rain is an event, for sure, but the ice is actually the (big) event."

The result was a strong decrease in tourism for the rest of the winter, specifically for activities such as guided snowmobile and dogsled tours. Tour numbers dropped by 28 percent compared to the previous winter, and were the lowest ever since 2001, which is when statistics were first continuously kept. The researchers also believe that had a ripple effect on hotel stays and other tourist activities.

Another potential problem exposed by the extreme event was the vulnerability of the town's infrastructure to avalanches. A major avalanche in June 1953 destroyed the town's hospital and other buildings, killing three people, but since then, many buildings have been constructed without regard to potential avalanche risks. If Svalbard's climate continues to warm as our downscaled climate scenarios predict, the likelihood of damaging avalanches will only increase, Hansen and colleagues say.

Hansen is continuing to investigate the consequences of a warmer arctic on Svalbard's natural communities and human population with a research project called VINTERREGN (Winter rain). Of particular interest is whether or not plants, which usually do not grow taller than a couple of inches at this latitude, can withstand being completely covered in ice for several months.

Extreme weather in the Arctic problematic for people, wildlife 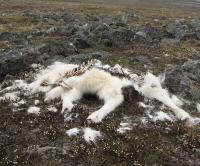