CORVALLIS, Ore. - Researchers at Oregon State University have developed two new modified toy car designs for children with disabilities in an effort to encourage them to further explore, play, and engage in physical and social activities.

The new cars were developed under the umbrella of the "Go Baby Go" program at OSU, which provides modified, ride-on toy cars to young children with disabilities so they can move around independently. Independent movement has been linked to a wide range of developmental benefits in young children.

The sit-to-stand car is a modified version of the original Go Baby Go car, but encourages the child to stand up in order to activate the switch that makes the car move. The goal is to encourage the physical skills of pulling up to stand, bear weight and balance, while also fostering more interaction with peers.

The "Throw Baby Throw" car is a modified toy car that uses a toy pitching machine to throw foam balls. The goal is to provide a way for children who have upper extremity limits to participate in throwing, a fundamental motor skill, while also facilitating socialization.

"Both of these devices are designed to encourage movement and social interaction, which are critical developmental skills for all young children," said Sam Logan, an assistant professor of kinesiology in the College of Public Health and Human Sciences at OSU and leader of the university's Go Baby Go program.

"Movement and socialization are very often combined early and continually as children develop."

Modified toy cars are an inexpensive way to help toddlers with mobility issues get around, experts say. Power wheelchairs can be costly and typically aren't available for children until they are older, and may not always be an option for children who are expected to eventually be able to walk. Toy cars and their modifications start at about $200, while motorized wheelchairs can run thousands of dollars.

The sit-to-stand car was designed for children who may or are expected to walk eventually but their walking is delayed. In the study of the sit-to-stand car in use, researchers found that a child with disabilities spent about 10 percent more time engaging with his peers on the playground or in the gym at school when he used the sit-to-stand car, compared to using his forearm crutches.

"That's exactly what you want to see," Logan said. "This car gets you up and gets you moving. It's also a way to introduce some fun around the practice of these skills that will help a child stand and walk on their own."

In developing the new car, researchers found the process takes just a few different steps than the original car. The "go" switch is located under the car's seat, rather than on the steering wheel or elsewhere. Training others to modify cars for sit-to-stand would be fairly simple and could be done in a few hours in a workshop, Logan said.

The Throw Baby Throw car uses the same "go" technology as the original car, with the added element of the pitching machine, which is also activated by a switch that a child could press.

"With the switch, kids with upper-extremity limits can throw the same as other kids," Logan said. "The design is really about facilitating this interaction with other kids. You also need someone to catch, retrieve or dodge the balls being thrown."

The engineering behind the throwing car is more complex and needs more refinement before the design could be shared more widely across the Go Baby Go network, Logan said. The throwing car also has not been studied in action. There is one car in use by clinicians in Portland now but the design is still considered a prototype, he said.

The overarching goal of the new car designs is to find more ways to encourage children with disabilities to move, play and engage with their peers from a young age, Logan said.

"We encourage families, clinicians and teachers to embrace a 'right device, right time, right place' approach that takes into account each child's specific needs and abilities," he said. "Whatever typically-developing kids do should be the gold standard for all children, including those with disabilities."

Co-authors of the technical report include Kathleen Bogart, William D. Smart, Brianna Goodwin, Samantha M. Ross, Michele Ann Catena, Austin A. Whitesell and Zachary J. Sefton of OSU; Heather Feldner of the University of Washington and Cole Galloway of the University of Delaware. The research was supported by the National Institutes of Health.

Co-authors of the study of the sit-to-stand car include Megan MacDonald and Haylee Winden of OSU; Feldner of UW; Galloway, Michele Lobo and Tracy Stoner of University of Delaware; and Melynda Schreiber of the University of Utah. The research was supported by the Unidel Foundation. 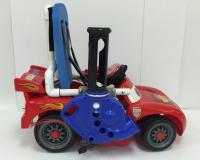