Maintaining astronaut bone and muscle health in microgravity is an ongoing concern for NASA, and now the agency is "forcing" the issue with a new investigation.

On May 29, 2014, NASA will fly the ForceShoe, designed by XSENS, to the International Space Station (ISS) and, although these shoes don't measure the same force of Star Wars lore, they will help NASA collect data for studying the loads, or force, placed on crew member bodies during exercise on the space station's Advanced Resistive Exercise Device (ARED).

To reduce the loss of bone and skeletal muscle strength experienced by astronauts during long duration spaceflight, NASA developed the ARED. The device provides crew members with the ability to perform weight-bearing exercises in space by supplying resistance through the power of vacuum cylinders.

"ARED is a sophisticated exercise device," said Andrea Hanson, Ph.D. and ISS Exercise Hardware Specialist. "Although it has helped NASA provide better health outcomes for crew members, there is still progress to be made in understanding the effects of exercise on bone and muscle health, and the ForceShoe will help us do that."

The Force Shoes investigation is an engineering evaluation. Although a number of portable load monitoring technologies (often referred to as force shoes) are under evaluation on Earth, NASA elected to fly the ForceShoe on the space station because it offers comprehensive load measures. During the investigation, researchers will use the shoe to measure exercise loads and ground reaction forces. These are the forces supplied by the ground to a body in contact with it. The device measures force in three axes: up and down, side-to-side and front-to-back. It also captures the torque, or twisting force, applied under foot during ARED exercise.

"We are eager to understand how joint forces may be different between exercise performed on the ground and in space, and force shoe technology might help us do this in future investigations," said Hanson.

Enhancing researchers' understanding of exercise form and the forces applied to the human body while using this unique spaceflight exercise hardware will help them recommend the best exercise regimens for safe and effective bone and muscle strength maintenance during spaceflight.

How will the investigation achieve this?

Researchers will ask two to four crew members to collect static load and dynamic exercise data while wearing the shoes, which look like high-tech sandals. During the static load test, crew members will be asked to set the ARED to provide specific loads in the same way they would set loads on a weightlifting machine at the gym. They will then lift the exercise bar and stand still on ARED while the shoes collect data. This simple and repetitive test is necessary to make sure the force measuring shoe works as well in microgravity as it does on Earth. Once the shoe is successfully demonstrated in space, researchers will use it as a tool to measure both human performance as well as the loads ARED is applying to the body during exercise. Dynamic exercise will include squats, deadlifts and bicep curls.

As crew members perform these exercises, the ForceShoe, which acts like an enhanced bathroom scale that measures loads applied downward as well as during front-to-back and side-to-side movements, will transmit data via Bluetooth technology to computers on the space station. Researchers on Earth will receive this data a couple of days later.

Initially, researchers will use these measures to validate the technology. The ultimate goal of using the technology; however, is to provide researchers with data they will use to calculate the force felt at specific joints such as the ankle, knee and hip. At the end of the evaluation, researchers will be able to determine whether or not they can use the tool for other Human Research Program research or for ongoing day-to-day operations on the space station and in future exploration missions.

"As we prepare for future missions to asteroids, Mars and beyond, we need to think about minimizing and miniaturizing equipment because spacecraft will be smaller," says Hanson. "The ForceShoe is a great example of the way we can shrink some of our research tools for future missions."

Hanson also adds that it is unknown what terrain crew members might face when they reach new planetary surfaces. By optimizing the effects of muscle and bone strength training and increasing the efficiency of exercise, devices like the ForceShoe will help properly train and strengthen crew members in preparation for exploring these planetary surfaces after long periods of weightlessness. Lessons learned from exercise performed during long duration missions in microgravity can be directly applied to populations here on Earth that are restricted from activity due to injury, aging, busy lifestyles, or confined work and living spaces. The force is certainly strong with this one.

May the force (shoes) be with you 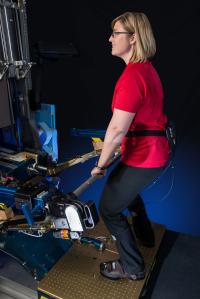 ForceShoe in Use on the ARED