Modern humans who first arose in Africa had moved into Europe as far back as about 45,000 years ago, according to a new study by an international research team led by the Russian Academy of Sciences and the University of Colorado at Boulder.

The evidence consists of stone, bone and ivory tools discovered under a layer of ancient volcanic ash on the Don River in Russia some 250 miles south of Moscow, said John Hoffecker, a fellow of CU-Boulder's Institute of Arctic and Alpine Research. Thought to contain the earliest evidence of modern humans in Europe, the site also has yielded perforated shell ornaments and a carved piece of mammoth ivory that appears to be the head of a small human figurine, which may represent the earliest piece of figurative art in the world, he said.

"The big surprise here is the very early presence of modern humans in one of the coldest, driest places in Europe," Hoffecker said. "It is one of the last places we would have expected people from Africa to occupy first."

A paper by Michael Anikovich and Andrei Sinitsyn of the Russian Academy of Sciences, Hoffecker, and 13 other researchers was published in the Jan. 12 issue of Science.

The excavation took place at Kostenki, a group of more than 20 sites along the Don River that have been under study for many decades. Kostenki previously has yielded anatomically modern human bones and artifacts dating between 30,000 and 40,000 years old, including the oldest firmly dated bone and ivory needles with eyelets that indicate the early inhabitants were tailoring animal furs to help them survive the harsh climate.

Most of the stone used for artifact construction was imported from between 60 miles and 100 miles away, while the perforated shell ornaments discovered at the lowest levels of the Kostenki dig were imported from the Black Sea more than 300 miles away, he said. "Although human skeletal remains in the earliest level of the excavation are confined to isolated teeth, which are notoriously difficult to assign to specific human types, the artifacts are unmistakably the work of modern humans," Hoffecker said.

The sediment overlying the artifacts was dated by several methods, including an analysis of an ash layer deposited by a monumental volcanic eruption in present-day Italy about 40,000 years ago, Hoffecker said. The researchers also used optically stimulated luminescence dating -- which helps them determine how long ago materials were last exposed to daylight -- as well as paleomagnetic dating based on known changes in the orientation and intensity of Earth's magnetic field and radiocarbon calibration.

Anatomically modern humans are thought to have arisen in sub-Saharan Africa around 200,000 years ago.

Kostenki also contains evidence that modern humans were rapidly broadening their diet to include small mammals and freshwater aquatic foods, an indication they were "remaking themselves technologically," he said. They may have used traps and snares to catch hares and arctic foxes, exploiting large areas of the environment with relatively little energy. "They probably set out their nets and traps and went home for lunch," he said.

While there is some evidence Neanderthals once occupied the plains of Eastern Europe, they seem to have been scarce or absent there during the last glacial period when modern humans arrived, he said. The lack of competitors like the Neanderthals might have been the chief attraction to the area and the reason why modern humans first entered this part of Europe, Hoffecker said.

"Unlike the Neanderthals, modern humans had the ability to devise new technologies for coping with cold climates and less than abundant food resources," he said. "The Neanderthals, who had occupied Europe for more than 200,000 years, seem to have left the back door open for modern humans. "

The ivory artifact believed to be the head of a small figurine, discovered during the 2001 field season, was broken and perhaps never was finished by the person who began crafting it more than 40,000 years ago, said Hoffecker. "This is a really interesting piece," he said. "If confirmed, it will be the oldest example of figurative art ever discovered."

Buried under 10 feet to 15 feet of silt, the artifacts at Kostenki include blades, scrapers, drills and awls, as well as sturdy antler digging tools known as mattocks that resemble crude pick-axes, he said. Mattocks have been found at other Old World sites and the arctic and were used to dig large pits for the storage of foods and fuel, although traces of such pits have yet to turn up at the lowest levels of Kostenki, he said.

Except for some early sites in the Near East, the oldest evidence modern humans outside of Africa comes from the Australian continent roughly 50,000 years ago, said Hoffecker, who was awarded an honorary doctorate from the Russian Academy of Sciences in 2006. Several modern human sites in south-central Europe may be almost as old as Kostenki, he said. 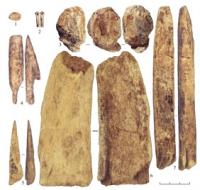