Cancer cells take up more glucose and amino acids to maintain cell growth and proliferation than normal cells. The former is more dependent on LAT1 (L-type amino acid transporter 1) for rapid uptake of sufficient amino acids, whereas the latter needs less amino acid and is supported by LAT2. LAT1 is highly expressed in various human cancers and was identified by Prof. KANAI Yoshikatsu and others. F-18 NKO-035 is a PET probe that specifically binds to LAT1. Safety and effectiveness of cancer specific F-18 NKO-035 was confirmed in pre-clinical studies.

Currently, 18-fluorine fluorodeoxyglucose positron emission tomography/computed tomography (18F-FDG PET/CT, an 18F-labeled glucose analog) is widely used for diagnosis and staging of most cancers as a minimally invasive, highly sensitive imaging technique. However, FDG does not specifically accumulate in tumors. Various degrees of FDG uptake are present in normal tissues and inflamed sites, making it difficult to judge the presence or absence of metastasis of a malignant lesion. Thus, highly sensitive diagnostic imaging techniques had been sought after.

This time, this group of researchers from Osaka University succeeded in a high yield of F-18 NKO-035 injection, studying its safety in humans as a PET agent for cancer diagnosis. After obtaining informed consent in clinical research, the group performed the world's first administration of F-18 NKO-035 to 4 healthy male adults for a 90-minute PET/CT scan. (Figure 1)

The effective dose for this whole-body PET study was equivalent to that for an FDG-PET scan conducted under the Japanese national health insurance system and was within the standard recommended in the International Commission on Radiological Protection (ICRP). Since significant changes in vital signs, changes in an electrocardiogram (ECG) and blood and urine tests, and adverse effects were not observed during a medical interview after F-18 NKO-035 injection, the safety of the intravenous administration of this PET agent was confirmed.

After completing this study in accordance with the Clinical Tests Act, this group will publish their results as an academic thesis. Later, they will conduct clinical research for cancer patients to evaluate the sensitivity and specificity of F-18 NKO-035 PET for cancer detection by comparing results obtained by conventional FDG-PET imaging diagnosis. This will reduce false positives for inflamed lesions, diagnosis of which was difficult to achieve by conventional PET imaging, and allow for highly accurate detection of cancer recurrence and metastasis. 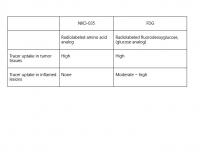