An international team of researchers has developed an enzyme produced from agricultural waste that could be used as an important additive in laundry detergents.

By using an enzyme produced from a by-product of mustard seeds, they hope to develop a low-cost naturally derived version of lipase, the second largest commercially produced enzyme, which is used in various industries for the production of fine chemicals, cosmetics, pharmaceuticals and biodiesel including detergents.

Thousands of tons of lipase are used annually for the production of laundry detergents as an additive or to replace the chemical detergents because of its advantage of being eco-friendly and better ability to remove oil stains without harming the texture of the cloth.

Lipase is one of the most rapidly growing industrial enzymes in the market and is worth $590.5million. However, the cost of biotechnologically produced lipases has always been a challenge, mainly due to the high cost of feedstocks.

They examined a lipase produced from mustard oil cakes, which are the by-products of oil extraction from the mustard seeds. Oil cakes are a very good resource for growth of microbes to produce enzymes. They fermented the oil cakes with the bacteria Anoxybacillus sp. ARS-1, living in a tropical hot spring Taptapani, Odisha, India to produce the lipase enzyme.

Mustard are the third most produced oilseed crops in the world after soybean and palm oil seed. These seeds are produced in tropical countries such as Bangladesh, Pakistan and Northern India. The mustard oil extracted from the seeds are used as cooking oils. Oil cakes that are the by-products of oil extraction contain relatively high amounts of protein with small amounts of anti-nutritional compounds like glucosinolates and their breakdown products, phenolics and phytates.

Dr Rahman said: "We further investigated suitability of the lipase enzyme in detergent formulations. Anoxybacillus sp. ARS-1 produced lipase was found to be stable and resist almost all chemical detergents as well as common laundry detergent such as Ezee, Surf, Ariel and Ghadhi, proving it to be a prospective additive for incorporation in the new detergent formulations."

The study 'Parameter optimization for thermostable lipase production and performance evaluation as prospective detergent additive' is published in the journal Preparative Biochemistry & Biotechnology. 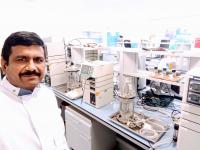