On November 30th, 2016, more than 100,000 people around the world contributed to a suite of first-of-a-kind quantum physics experiments known as The BIG Bell Test. Using smartphones and other internet-connected devices, participants contributed unpredictable bits, which determined how entangled atoms, photons, and superconducting devices were measured in twelve laboratories around the world. Scientists used the human input to close a stubborn loophole in tests of Einstein's principle of local realism. The results have now been analysed, and are reported in this week's Nature.

In a Bell test (named for the physicist John Stewart Bell), pairs of entangled particles such as photons are generated and sent to different locations, where particle properties such as the photons' colours or time of arrival are measured. If the measurement results tend to agree, regardless of which properties we choose to measure, it implies something very surprising: either the measurement of one particle instantly affects the other particle (despite being far away), or even stranger, the properties never really existed, but rather were created by the measurement itself. Either possibility contradicts local realism, Einstein's worldview of a universe independent of our observations, in which no influence can travel faster than light.

The BIG Bell Test asked human volunteers, known as Bellsters, to choose the measurements, in order to close the so-called "freedom-of-choice loophole" - the possibility that the particles themselves influence the choice of measurement. Such influence, if it existed, would invalidate the test; it would be like allowing students to write their own exam questions. This loophole cannot be closed by choosing with dice or random number generators, because there is always the possibility that these physical systems are coordinated with the entangled particles. Human choices introduce the element of free will, by which people can choose independently of whatever the particles might be doing.

Led by ICFO-The Institute of Photonic Sciences, in Barcelona, the BIG Bell Test recruited participants worldwide to contribute unpredictable sequences of zeros and ones (bits) through an online video game. The bits were routed to state-of-the-art experiments in Brisbane, Shanghai, Vienna, Rome, Munich, Zurich, Nice, Barcelona, Buenos Aires, Concepción Chile and Boulder Colorado, where they were used to set the angles of polarizers and other laboratory elements to determine how entangled particles were measured.

Participants contributed with more than 90 million bits, making possible a strong test of local realism, as well as other experiments on realism in quantum mechanics. The obtained results strongly disagree Einstein's worldview, close the freedom-of-choice loophole for the first time, and demonstrate several new methods in the study of entanglement and local realism.

Each of the twelve labs around the world carried out a different experiment, to test local realism in different physical systems and to test other concepts related to realism.

The CAS-USTC team, led by Prof. Jian-Wei Pan and Prof. Qiang Zhang, works to explore the Bell's inequality with partial perfect randomness input. Analysing the random numbers contributed by Bellsters, we may find the human random number are not perfectly random, and tend to produce patterns. However, the human generated randomness is highly attractive because of the element of human free will. True randomness, which is not controlled by hidden variables, exists in between the human choices. Remarkably, it is able to say how well the hidden variable would have to control the human choices. This is made possible by using a special type of Bell inequality, the measurement dependent local (MDL) inequality. In the experiment, a 780 nm pump laser focused on a periodically poled potassium titanyl phosphate (PPKTP) crystal to create photon pairs at 1560 nm via spontaneous parametric down conversion. The down-converted photon pairs interfere at the polarizing beam splitter (PBS) in a Sagnac based setup to create entangled pairs. The entangled state is adjusted to be a special non-maximum entangled state for the inequality. The photon pairs are then sent to two measurement stations that are ~90 meters away for measurement. This spatial separation makes sure the measurement in Alice's lab will not affect that in Bob's lab, and vice versa. The random numbers contributed by Bellsters control the Pockels cell to set the measurement basis for each pair of photons. The photons are finally detected with superconducting nanowire single-photon detectors (SNSPDs, produced by the group led by Dr. Lixing You from CAS-SIMIT). The violation of the MDL Bell inequality gives the bound of the input human randomness to rule out local realism. With around 80 Mb random numbers contributed by Bellsters, the MDL Bell inequality violation is decided to be l = 0.10 ± 0.05.

Jian-Wei Pan, Professor at CAS-USTC: "Although there are numerous Bell test experiments, the "free will" loophole is still not closed. This experiment is a very interesting and important try. In the future, with the help of space station, one may close both "collapse locality" and "free will" loopholes in one experiment."

Carlos Abellán, researcher at ICFO and instigator of the project: "The BIG Bell Test was an incredibly challenging and ambitious project. It sounded impossibly difficult on day zero, but became a reality through the efforts of dozens of passionate scientists, science communicators, journalists and media, and especially the tens of thousands of people that contributed to the experiment during November 30th, 2016."

Morgan Mitchell, leader of the BBT project and ICREA Professor at ICFO: "What is most amazing for me is that the argument between Einstein and Niels Bohr, after more than 90 years of effort to make it rigorous and experimentally testable, still retains a human and philosophical element. We know that the Higgs boson and gravitational waves exist thanks to amazing machines, physical systems built to test the laws of physics. But local realism is a question we can't fully answer with a machine. It seems we ourselves must be part of the experiment, to keep the Universe honest."

The BIG Bell Test team once again would like to thank the thousands of participants who so generously and enthusiastically contributed to this initiative. Without this essential contribution, the experiment would have never been possible.

The twelve labs that ran experiments on November 30th of 2016 were: 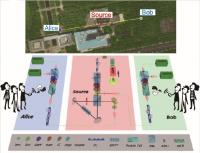 The Setup of the Experiment