The threat of landslides is again in the news as torrential winter storms in California threaten to undermine fire-scarred hillsides and bring deadly debris flows crashing into homes and inundating roads.

But it doesn't take wildfires to reveal the landslide danger, University of California, Berkeley, researchers say. Aerial surveys using airborne laser mapping -- LiDAR (light detection and ranging) -- can provide very detailed information on the topography and vegetation that allow scientists to identify which landslide-prone areas could give way during an expected rainstorm. This is especially important for predicting where shallow landslides -- those just involving the soil mantle -- may mobilize and transform as they travel downslope into destructive debris flows.

The catch, they say, is that such information cannot yet help predict how large and potentially hazardous the landslides will be, meaning that evacuations may target lots more people than are really endangered by big slides and debris flows.

In a new paper appearing this week in the journal Proceedings of the National Academy of Sciences, the scientists, UC Berkeley geologist William Dietrich and project scientist Dino Bellugi report their latest attempt at tagging landslide-prone areas according to their likely size and hazard potential, in hopes of more precise predictions. Their model takes into account the physical aspects of hillsides -- steepness, root structures holding the slope in place and soil composition -- and the pathways water follows as it runs downslope and into the soil.

Yet, while the model is better at identifying areas prone to larger and potentially more dangerous landslides, the researchers discovered factors affecting landslide size that can't easily be determined from aerial data and must be assessed from the ground -- a daunting task, if one is concerned about the entire state of California.

The key unknowns are what the subsurface soil and underlying bedrock are like and the influence of past landslides on ground conditions.

"Our studies highlight the problem of overprediction: We have models that successfully predict the location of slides that did occur, but they end up predicting lots of places that didn't occur because of our ignorance about the subsurface," said Dietrich, UC Berkeley professor of earth and planetary science. "Our new findings point out specifically that the spatial structure of the hillslope material -- soil depth, root strength, permeability and variabilities across the slope -- play a role in the size and distribution and, therefore, the hazard itself. We are hitting a wall -- if we want to get further with landslide prediction that attempts to specify where, when and how big a landslide will be, we have to have knowledge that is really hard to get, but matters."

Decades of studies by Dietrich and others have led to predictive models of where and under what rainfall conditions slopes will fail, and such models are used worldwide in conjunction with weather prediction models to pinpoint areas that could suffer slides in an oncoming storm and warn residents. But these models, triggered by a so-called "empirical rainfall thresholds," are conservative, and government agencies often end up issuing evacuation warnings for large areas to protect lives and property.

Dietrich, who directs the Eel River Critical Zone Observatory -- a decade-long project to analyze how water moves all the way from the tree canopy through the soil and bedrock and into streams -- is trying to improve landslide size prediction models based on the physics of slopes. Airborne laser imaging using LiDAR can provide submeter-scale detail, not only of vegetation, but also of the ground under the vegetation, allowing precise measurements of slopes and a good estimate of the types of vegetation on the slopes.

Slopes fail during rainstorms, he said, because the water pressure in the soil -- the pore pressure -- pushes soil particles apart, making them buoyant. The buoyancy reduces the friction holding the soil particles against gravity, and once the mass of the slide is enough to snap the roots holding the soil in place, the slope slumps. Shallow slides may involve only the top portion of the soil, or scour down to bedrock and push everything below it downslope, creating deadly debris flows that can travel several meters per second.

Each wet year along the Pacific Coast, homes are swept away and lives lost from large landslides, though the threat is worldwide. As illustrated by a landslide in Sausalito exactly two years ago, landslides can originate just a short distance upslope and mobilize as a debris flow traveling meters per second before striking a house. The size of the initial landslide will influence the depth and speed of the flow and the distance it can travel downslope into canyons, Dietrich said.

With earlier computer models, Dietrich and his colleagues were able to pinpoint more precisely the places on hillslopes that would suffer landslides. In 2015, for example, Bellugi and Dietrich used their computer model to predict shallow landslides on a well-studied hillslope in Coos Bay, Oregon, during a sequence of landslide-triggering rainstorms, based solely on these physical measures. Those models employed LiDAR data to calculate steepness and how water would flow downslope and affect pore pressure inside the slope; the seasonal history of rainfall in the area, which helps assess how much groundwater is present; and estimates of the soil and root strength.

In the new paper, Bellugi and David Milledge of Newcastle University in Newcastle upon Tyne in the United Kingdom tested the landslide prediction model on two very different landscapes: a very steep, deeply etched and forested hillside in Oregon, and a smooth, grassy, gently sloped glacial valley in England's storied Lake District.

Surprisingly, they found that the distribution of small and large shallow landslides were quite similar across both landscapes and could be predicted if they took into account one extra piece of information: the variability of hillslope strength across these hillsides. They discovered that small slides can turn into major slides if the conditions -- soil strength, root strength and pore pressure -- do not vary sufficiently over short distances. Essentially, small slides can propagate across the slope and become larger by connecting isolated slide-prone areas, even if they're separated by more solid slope.

"These areas that are susceptible to shallow landslides, even though you may be able to define them, may coalesce, if close enough to each other. Then you can have a big landslide that encompasses some of these little patches of low strength," Bellugi said. "These patches of low strength may be separated by areas that are strong -- they may be densely forested or less steep or drier -- but if they are not well separated, then those areas can coalesce and make a giant landslide."

"On hillsides, there are trees and topography, and we can see them and quantify them," Dietrich added. "But starting from the surface and going down into the ground, there is a lot that we need in models that we can't now quantify over large areas: the spatial variation in soil depth and root strength and the influence of groundwater flow, which can emerge from the underlying bedrock and influence soil pore pressure."

Getting such detailed information across an entire slope is a herculean effort, Dietrich said. On the Oregon and Lake District slopes, researchers walked or scanned the entire area to map vegetation, soil composition and depth, and past slides meter by meter, and then painstakingly estimated root strength, all of which is impractical for most slopes.

"What this says is that to predict the size of a landslide and a size distribution, we have a significant barrier that is going to be hard to cross -- but we need to -- which is to be able to characterize the subsurface material properties," Dietrich said. "Dino's paper says that the spatial structure of the subsurface matters."

The researchers' previous field studies found, for example, that fractured bedrock can allow localized subsurface water flow and undermine otherwise stable slopes, something not observable -- yet -- by aerial surveys.

They urge more intensive research on steep hillsides to be able to predict these subsurface features. This could include more drilling, installing hydrologic monitoring equipment and application of other geophysical tools, including cone penetrometers, which can be used to map soil susceptible to failure.

Other co-authors of the paper are Lauren Larsen and Kurt Cuffey, UC Berkeley professors of geography. 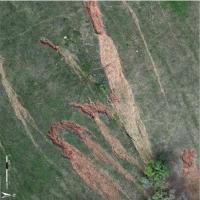