The study, published in the journal Information Technology for Development, demonstrated that two years after being shown an educational animated video on a postharvest bean storage method, farmers in Mozambique had a 97% retention rate and 89% adoption of the storage solution.

According to Julia Bello-Bravo, the study's lead author, these results are crucial since developing and deploying scalable educational solutions for farmers in developing countries remains an elusive goal.

"These animated intervention strategies are viable for scaling since they can be produced in the local languages of the farmers and distributed through readily available resources such as smartphones," said Bello-Bravo, assistant professor in the Department of Food Science and Human Nutrition. "It's a cost-effective approach to reach isolated communities that might not otherwise have access to these important agricultural solutions."

In most African countries, agriculture is a major economic industry; in Mozambique, 90% of rural households farm. However, poverty, low literacy rates, lingering effects of war and environmental threats keep farmers from receiving the proper education to improve their crop yield and means of support.

"We are dealing with the Last Mile Problem - how to get information to people in hard-to-reach places so they are aware of the techniques that can improve their own lives," said Barry Pittendrigh, an MSU Foundation professor in the Department of Entomology, who co-founded of Scientific Animations Without Borders with Bello-Bravo.

SAWBO is a university-based program that transforms extension information on agriculture, health and women's empowerment into animated videos, which are translated into many languages.

Bello-Bravo said two major barriers to education are language and gender, especially in countries where women may do much of the farming but aren't given equal access to traditional learning opportunities.

"Our videos can be adapted to a diversity of cultural scenarios, allowing women, men and a great diversity of age groups to view them and learn the proper techniques," Bello-Bravo said. "In this study we observed women taking an active role in learning and sharing the information they gained from the animations. Add to this, many people started using the technique. We were excited to see that people both learned from the materials and used the technique presented in the animation."

In 2015, the researchers taught farmers in the Gurue District in Mozambique, using animated videos or traditional lectures, how to use jerrycans to secure stored beans for future planting seasons. Jerrycans, containers often used in Africa to store water, were chosen because they are easily and cheaply obtained, yet they keep the seeds dry and protected from pests.

In 2017, the researchers analyzed the farmers' ability to recall the eight steps in the process, if they had used the new storage technique, and if they had shared the technique with other farmers.

These videos have applications around the world, Bello-Bravo said.

"Animations can also be useful for explaining complex ideas to the general population or those that speak diverse global languages to share information around medical needs, such as cancer screening," she said. "We recognize that this is one animation on one technique in one experimental situation; however, the results are encouraging, and we hope to test these outcomes under different topic areas, groups and circumstances."

This study was funded in part by the United States Agency for International Development as part of the Feed the Future Innovation Lab for Collaborative Research on Grain Legumes. Robert Mazur and Eric Abbott from Iowa State University, and Sostino Mocumbe and Ricardo Maria from the Mozambique Institute of Agricultural Research contributed to this research.

The video used in the survey was translated into the local language of Lomwe and also is available in Portuguese, the native language of Mozambique. 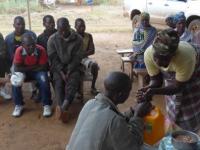