PROVIDENCE, R.I. [Brown University] — Lake Tanganyika, the second oldest and the second-deepest lake in the world, could be in for some rough waters.

Geologists led by Brown University have determined the east African rift lake has experienced unprecedented warming during the last century, and its surface waters are the warmest on record. That finding is important, the scientists write in the journal Nature Geoscience, because the warm surface waters likely will affect fish stocks upon which millions of people in the region depend.

The team took core samples from the lakebed that laid out a 1,500-year history of the lake's surface temperature. The data showed the lake's surface temperature, 26 degrees Celsius (78.8°F), last measured in 2003, is the warmest the lake has been for a millennium and a half. The team also documented that Lake Tanganyika experienced its biggest temperature change in the 20th century, which has affected its unique ecosystem that relies upon the natural conveyance of nutrients from the depths to jumpstart the food chain upon which the fish survive.

"Our data show a consistent relationship between lake surface temperature and productivity (such as fish stocks)," said Jessica Tierney, a Brown graduate student who this spring earned her Ph.D. and is the paper's lead author. "As the lake gets warmer, we expect productivity to decline, and we expect that it will affect the [fishing] industry."

Lake Tanganyika is bordered by Burundi, the Democratic Republic of Congo, Tanzania, and Zambia — four of the poorest countries in the world, according to the United Nations Human Development Index. An estimated 10 million people live near the lake, and they depend upon it for drinking water and for food. Fishing is a crucial component for the region's diet and livelihood: Up to 200,000 tons of sardines and four other fish species are harvested annually from Lake Tanganyika, a haul that makes up a significant portion of local residents' diets, according to a 2001 report by the Lake Tanganyika Biodiversity Project.

Lake Tanganyika, one of the richest freshwater ecosystems in the world, is divided into two general levels. Most of the animal species live in the upper 100 meters, including the valuable sardines. Below that, the lake holds less and less oxygen, and at certain depths, it is anoxic, meaning it has no oxygen at all. What this all means is the lake is highly stratified and depends on wind to churn the waters and send nutrients from the depths toward the surface as food for algae, which supports the entire food web of the lake. But as Lake Tanganyika warms, the mixing of waters is lessened, the scientists find, meaning less nutrients are funneled from the depths toward the surface. Worse, more warming at the surface magnifies the difference in density between the two levels; even more wind is needed to churn the waters enough to ferry the nutrients toward the fish-dwelling upper layer.

The researchers' data show that during the last 1,500 years, intervals of prolonged warming and cooling are linked with low and high algal productivity, respectively, indicating a clear link between past temperature changes and biological productivity in the lake.

"The people throughout southcentral Africa depend on the fish from Lake Tanganyika as a crucial source of protein," Cohen noted. "This resource is likely threatened by the lake's unprecedented warming since the late 19th century and the associated loss of lake productivity."

Climate change models show a general warming in the region, which, if accurate, would cause even greater warming of the Lake Tanganyika's surface waters and more stratification in the lake as a whole. "So, as you move forward, you can imagine that density gradient increasing," Russell said.

Some researchers have posited that the declining fish stocks in Lake Tanganyika can be attributed mainly to overfishing, and Tierney and Russell say that may be a reason. But they note that the warming in the lake, and the lessened mixing of critical nutrients is exacerbating the stocks' decline, if not causing it in the first place. "It's almost impossible for it not to," Russell said.

Other authors on the paper are Brown graduates Marc Mayes and Natacha Meyer; Christopher Johnson at the University of California, Los Angeles; and Peter Swarzenski, with the United States Geological Survey. The National Science Foundation and the Nyanza Project funded the research. 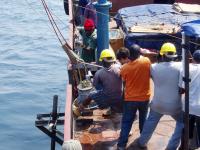 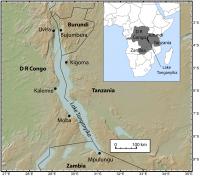