Lyme disease is the most commonly reported vector-borne illness in the United States. But it can be confused with similar conditions, including Southern Tick-Associated Rash Illness. A team of researchers led by Colorado State University has identified a way to distinguish Lyme disease from similar conditions, according to a new study published August 16 in Science Translational Medicine.

Senior author John Belisle, a professor in CSU's Department of Microbiology, Immunology and Pathology, said the findings are significant because current laboratory tests for early Lyme disease are not ideal. The research team, which also included scientists from the Centers for Disease Control and Prevention, hopes the findings will lay the groundwork for other studies that could lead to better early testing for Lyme disease.

"We were able to tell the difference between early Lyme disease and Southern Tick-Associated Rash Illness by using biomarkers that show us how the body reacts to these illnesses," Belisle said. "This could be important in helping to more accurately detect early Lyme disease, which is crucial because the longer people wait for Lyme disease treatment, the higher the potential risk for having more severe symptoms."

Though Lyme disease is the most commonly reported vector-borne illness in the U.S., current laboratory tests aren't sensitive enough to detect infection with high accuracy in the first few weeks of Illness. Adding to the complexity, researchers have yet to identify what pathogen causes Southern Tick-Associated Rash Illness, which is characterized by a rash indistinguishable from that of Lyme disease and by possible fatigue, fever, headache, and muscle pains. The current laboratory test used for Lyme disease also cannot diagnose the illness.

Additionally, the geographic boundaries of both diseases are expanding and will overlap even more in the years to come, making the need for a more accurate early test for Lyme disease all the more urgent.

The researchers used mass spectrometry to identify biomarkers of metabolic differences in the two diseases. In doing this, they were able to differentiate early Lyme disease from STARI with an accuracy of up to 98 percent.

An estimated 300,000 cases of Lyme disease occur annually in the U.S., with most of the cases occurring in the northeast and upper Midwest. In 2015, 95 percent of confirmed Lyme disease cases were reported from 14 states. Lyme disease is transmitted when blacklegged ticks infected with the bacterium Borrelia burgdorferi bite people. Lone star ticks, which cause STARI, do not transmit B. burgdorferi.

Properly diagnosing Lyme disease can at times be challenging because of the limitations of the current laboratory test, particularly during the early stages of disease.

"It is extremely important to be able to tell a patient they have Lyme disease as early as possible so they can be treated as quickly as possible," said Claudia Molins, first author of the study and a microbiologist in the CDC's Division of Vector-Borne Diseases. "Most Lyme disease infections are successfully treated with a two to three-week course of oral antibiotics."

Researchers have also found that Lyme disease-related health care costs are huge. In a 2015 report published in PLOS ONE, a team from the Johns Hopkins Bloomberg School of Public Health found that Lyme disease costs the U.S. healthcare system between $712 million and $1.3 billion a year in return doctor visits and testing.

Belisle's research is rooted in tuberculosis and leprosy, but he saw that the approaches his team has taken with those diseases -- developing biomarkers or biosignatures for diagnosing a disease or the prognosis for a disease -- could be applied to developing a diagnostic test for STARI and improving Lyme disease diagnostic tests.

"We have found that all of these infections and diseases are associated with an inflammatory response, but the alteration of the immune response, and the metabolic profiles aren't all the same," Belisle said.

Metabolic pathways are a linked series of chemical reactions occurring within a cell. "To some extent, your metabolism is going to change based on what your ailments are," Molins explained. The studies performed were based on this idea that unique metabolic differences are associated with an illness or disease. The research team looked at metabolites, very small molecules produced by the body that include things like sugars, peptides, amino acids, and lipids.

Fine-tuning the test for broader use

Next steps for the team include developing a test that could be used in a diagnostic lab, outside of a research setting.

"The focus of our efforts is to develop a test that has a much greater sensitivity, and maintains that same level of specificity," Belisle said. "We don't want people to receive unnecessary treatment if they don't have Lyme disease, but we want to identify those who have the disease as quickly as possible."

In the longer-term, Belisle said researchers also hope to monitor how patients respond to treatment.

Study coauthors also include researchers from New York Medical College and the Burnett School of Biomedical Sciences at the University of Central Florida. 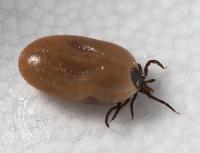 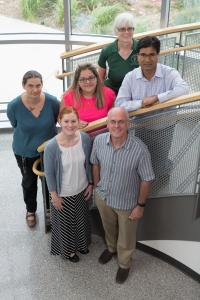