Floods and droughts in East Africa are often unleashed by far-away events in the tropical Pacific—the warm (El Niño) or cool (La Niña) phases of the El Niño-Southern Oscillation (ENSO). A catastrophic drought is currently wreaking havoc in wide regions of Kenya, Ethiopia, Djibouti and Somalia, affecting food security and putting millions of people in urgent need of assistance. Scientists have attributed the severe drying to La Niña conditions that prevailed from June 2010 to May 2011 in the Pacific.

The waxing and waning of rainfall in eastern tropical Africa in unison with ENSO is nothing unusual and existed already 20,000 years ago, according to a study published in the August 5 issue of Science by a group of scientists from Germany, Switzerland, the US, the Netherlands, and Belgium.

Clues to this imprint come from Lake Challa, a crater lake in the foothills of Mt. Kilimanjaro. The mud at the lake's bottom shows yearly sedimentation layers, which consist of pairs of light- and dark-colored striations and range between 0.08 and 7 mm in thickness. Comparison of thickness-variations of these sediment layers with instrumental records of tropical Pacific temperatures over the last 150 years shows that they reflect ENSO behavior.

"During La Niña, rainfall is sparse and the winds over Lake Challa are strong. The winds enhance upwelling of nutrients, intensifying the seasonal blooms of algae. After dying and sinking, they form thick layers of light-colored sediments. During El Niño events, on the other hand, rainfall is frequent and the winds are weak, resulting in thinner white layers in the sediment," explains author Christian Wolff at the University of Potsdam in Germany.

The thickness and color of the layers allowed the team to reconstruct the history of East African rainfall back in time to the Last Ice Age. The layers are testimony that climate in East Africa changed dramatically over the past 21,000 years. During the coldest period 18,000 to 21,000 years ago, the climate was dry and relatively stable.

"Even though rainfall did not vary much during that period, the sediment layers still reflect the beat of El Niño and La Niña cycles" says co-author Axel Timmermann, Professor at the International Pacific Research Center and the School of Ocean and Earth Science and Technology, University of Hawaii at Manoa. "Compared with this coldest time, the last 3,000 years have been wetter, but more variable with severe century-long droughts sprinkled throughout."

These observations fit the growing consensus that the current global-warming trend will affect the large-scale rainfall patterns. They are also consistent with computer models simulating the 21st century climate in eastern equatorial Africa in response to increasing greenhouse gas concentrations. As climate warms, the atmosphere holds more moisture, and thus the East African short rainy period in October to November is likely to get wetter. The climate, however, will also show more variability with occasional severe droughts such as the present one.

"Will these projected changes affect East Africa's unique biodiversity in its national parks, such as the Serengeti?" asks Timmermann. "We do not yet know, but there are fascinating links to explore further."

The International Pacific Research Center (IPRC) at the School of Ocean and Earth Science and Technology (SOEST), University of Hawaii at Manoa, is a climate research center founded to gain greater understanding of the climate system and the nature and causes of climate variation in the Asia-Pacific region and how global climate changes may affect the region. Established under the "U.S.-Japan Common Agenda for Cooperation in Global Perspective" in October 1997, the IPRC is a collaborative effort between agencies in Japan and the United States. 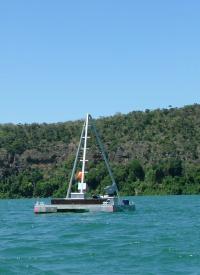