Researchers from the Okinawa Institute of Science and Technology Graduate University (OIST) have revealed the evolutionary history of the crown-of-thorns starfish - a predator of coral that can devastate coral reefs. Their findings shed light on how the populations of these starfish have changed over time and could potentially help reduce their ecological destruction.

A single crown-of-thorns starfish is formidable, with a large body covered in spiky, venomous thorns. But their true danger lies in their potent reproductive ability, with female crown-of thorns starfish releasing millions of eggs in a single spawning. This can quickly lead to plagues, with uncontrollably large numbers of starfish rapidly destroying vast areas of coral reef.

"Almost 40 years ago, Okinawa experienced a massive outbreak of crown-of-thorns starfish, where over 1.5 million starfish had to be removed by divers by hand," said Professor Noriyuki Satoh, senior author of the student and leader of the Marine Genomics Unit at OIST.

Although outbreaks have recently become less frequent around Okinawa and other subtropical islands in the Ryukyu Archipelago, they have become an increasingly large threat to the Great Barrier Reef in Australia, along with coral bleaching and tropical cyclones. These starfish outbreaks are becoming more common and more severe, as increasingly polluted and warmer waters aid the survival of the larvae.

In 2017, the OIST Marine Genomics Unit teamed up with Australian scientists to decode the genome of the crown-of-thorns starfish, with their results published in Nature. Now, in their latest study published in G3: Genes|Genomes|Genetics, the Marine Genomics Unit wanted to explore whether any information was recorded in the starfish genomes that could shed light on how and why these outbreaks occur.

The researchers collected crown-of-thorns starfish from coral reefs around three different islands in the Ryukyu Archipelago - Okinawa, Miyako and Iriomote. The scientists then sequenced the entire DNA found in the mitochondria, comprised of over 16,000 nucleotide bases, and used differences in the sequences between the individual starfish to construct an evolutionary tree.

"The blue starfish is also a coral reef predator that lives in the same habitat as the crown-of-thorns starfish, but it doesn't produce these uncontrollable outbreaks," said Prof. Satoh. "Meanwhile, the northern Pacific sea star is the most common starfish in Japan and lives in colder waters around the Japanese mainland."

The scientists found that the evolutionary tree for the northern Pacific sea star showed that the species had split into two major lineages. Starfish collected from three different locations in the seas around the north-eastern regions of Japan were composed of individuals from one lineage, whilst a single population in the Seto Inland Sea in south-west Japan was formed of individuals from a second, more recent lineage.

"We believe that in a rare migration event, starfish larvae dispersed to the Seto Inland Sea. As these two areas are so separated, no migration occurred afterwards between the two populations, which resulted in the species splitting into two lineages," said Prof. Satoh. "Meanwhile, shorter range ocean currents kept individuals from the first lineage mixed between the nearby locations in the north-east of Japan."

For the blue starfish, the results were more surprising. The constructed evolutionary tree showed that the species had first split into two lineages, with the second lineage then diverging again into two smaller subgroups. But intriguingly, individuals from the two major lineages were found in both Okinawa and Ishigaki - the two areas in the Ryukyus where the blue starfish was collected. This means that two distinct starfish populations are living in the same geographic regions but are not breeding and mixing their genes. Prof. Satoh believes that this is strong evidence for there being two cryptic species of blue starfish - in other words, the starfish look the same despite being separate, non-breeding species.

The results also suggest that blue starfish migration occurs in both directions between Okinawa and Ishigaki. This was unexpected as the scientists had previously assumed that the powerful northeastern current flowing from Ishigaki towards Okinawa prevented starfish larvae from being carried in the opposite direction.

"For migration to readily occur in both directions, this suggests that the ocean currents in the Ryukyu Archipelago may be more complex that previously imagined," said Prof. Satoh.

Overall, the evolutionary tree for the crown-of-thorns starfish looked significantly different from the other two starfish, underlying key differences in the species' historical population dynamics. Despite being a much younger species than the other two species, diverging less than one million years ago, the tree showed that the starfish quickly fragmented into five small lineages. These findings suggest that the species underwent frequent genetic bottlenecks, where the population was reduced to just a small number of individuals, which then jumpstarted a new lineage.

"This implies that the starfish outbreaks are just one part of a larger 'boom and bust' population cycle, where if they are left to their natural devices, the starfish eat so much coral that they run out of food and die," said Prof. Satoh.

For their next steps, the Marine Genomics Unit is collaborating with Australian scientists to analyze crown-of-thorns starfish from the Great Barrier Reef. Instead of just using DNA in the mitochondria, the scientists aim to sequence the entire genome of each starfish, including DNA in the nucleus.

"Ultimately, we hope our findings can help us understand the population trends of the starfish better and the role of ocean currents in seeding new outbreaks," concluded Prof. Satoh. "This could potentially help us predict and therefore mitigate future outbreaks." 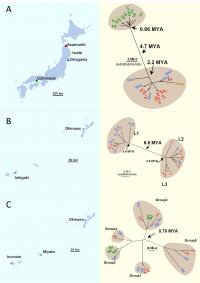