When Melanie Martin was a graduate student at UC Santa Barbara doing fieldwork in Bolivia, she and her husband decided the time was right to start a family. Martin got pregnant almost immediately, and when she credited her success to the parasites she and her colleagues were studying, the researchers wondered if there was a kernel of truth to her assertion.

The scientists, conducting research on the Tsimane, an isolated indigenous population in the country's central lowlands, decided to analyze nine years of longitudinal data they had amassed to determine whether parasites did in fact affect the female population's fertility. Their results appear today in the journal Science.

"We found that different species of helminths -- a family of parasitic intestinal worms -- could have either positive or negative effects on the timing of a Tsimane woman's next pregnancy," said lead author Aaron Blackwell, an assistant professor in UCSB's Department of Anthropology. "Hookworm infection tended to increase the length of the intervals between births and that was consistent across all ages. But younger women infected with roundworm had shorter birth intervals."

Examining the two most common parasites -- hookworm (Necator americanus or Ancylostoma duodenale) and giant roundworm (Ascaris lumbricoides) -- the investigators found that women infected with roundworm were more likely to become pregnant, while women infected with hookworm were less likely. Extrapolating their findings to estimate the effects on fertility of chronic helminth infection over the reproductive lifespan, they found that hookworm-infected women would have three fewer children than uninfected women and roundworm-infected women would have two additional children. On average, Tsimane women have nine children.

"These opposing effects are likely due to helminth infection affecting the immune system, which in turn affects the likelihood of conception," Blackwell said. "Our findings suggest that helminth infections may have substantial effects on demographic patterns in developing populations. Further, these results may also have implications for fertility in developed populations, where many fertility problems are connected to autoimmune disorders."

Although associated with anemia and other morbidities, helminth infections among the Tsimane are frequently asymptomatic, and patients themselves often do not know they are infected. Nonetheless, infected Tsimane women have extremely elevated levels of immunoglobulin E due to parasites, and previous work has shown that helminth infections in this population alter the odds of infection with additional parasites and other disease conditions.

"This study examines yet another domain where helminths and their regulatory effect on the immune system may be relevant to broader aspects of health and well-being," said co-author Michael Gurven, a UCSB anthropology professor and co-director of the Tsimane Life History and Health Project. "Although we don't know the precise mechanism behind these results, our findings are still compelling and suggest that immune modulation -- via our 'old friends' the intestinal worms -- can have far-reaching effects on the body, even though the findings may be less applicable in developed populations where women only have a few children over their lifetime.

"In fact, the Tsimane look at us as poor because we only have one or two children," Gurven added. "Their population growth rate is almost 4 percent, so every 17 years or so, they double their numbers."

According to these latest findings, certain helminths may explain why, in some cases, naturally fertile Tsimane women are particularly so.

All in the family 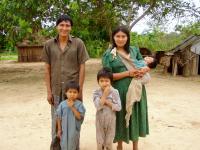