A team of 13 scientists led by Indiana University Bloomington biologists Rudolf and Elizabeth Raff found that the invasion of dying embryo cells by bacteria -- and the subsequent formation of densely packed bacterial biofilms inside the embryo cells -- can completely replace embryo cell structure, generating a faithful replica of the embryo. The scientists call this formation a "pseudomorph," a model of the embryo made of bacteria. Their report will appear online via the Proceedings of the National Academy of Sciences "Early Edition" as early as Nov. 24.

"The bacteria consume and replace all the cytoplasm in the cells, generating a little sculpture of the embryo," said Elizabeth Raff, the report's lead author. "We did find, however, that certain conditions must be met if the bacteria are going to aid the preservation process."

Among those conditions, Raff said that at the time of its death, the embryo must exist in a low-oxygen or reducing environment, such as the bottom of a deep ocean or buried in anoxic lakeside mud. If significant oxygen is available, the embryo will undergo "autolysis," or self-destruction, as digestive enzymes get free and wreak havoc. Without oxygen, autolytic enzymes remain stuck inside their organelle prisons.

"The next step, we believe, is that bacteria able to survive in low-oxygen conditions must then infest the cells of the dying embryo," Raff said.

The bacteria form biofilms, crowded assemblies of bacterial cells held together by sticky fibers made of proteins and sugars. As the biofilms fill the embryo cells, the tiny bacteria insinuate themselves between and among the organelles, forming a faithful representation of the cell's innards.

Lastly, the bacteria must leave a permanent record. In the case of finely preserved fossil embryos, the bacteria likely excrete tiny crystals of calcium phosphate (CaPO4), which eventually replace the bacterial sculptures. It is these crystals, Raff says, that provide the support for embryo and soft tissue fossilization.

"That's a crucial step," said Rudolf Raff. "Calcium deposits can show us even minute details of structure and shape, not only of the bacteria laying down the minerals, but also of the embryo cell structures all around them. In our experiments, we observed bacteria depositing calcium carbonate (CaCO3), but not calcium phosphate. We'll need to simulate different conditions to fully replicate this step."

High resolution imaging of a trove of half-a-billion-year-old animal embryo fossils from Doushantuo, China, provided scientists with tantalizing evidence that bacteria may have been involved in the preservation of the delicate cells. Scanning electron microscopy shows oblong concavities on the surface of the embryo fossils, suggesting the cells had been infested with bacteria or bacterial biofilms.

The research presented in the PNAS paper reveals how bacteria-aided fossilization could happen.

The scientists examined embryos in the presence of high and low oxygen, with or without inoculums of oxygen-poor marine mud, and in the presence or absence of bacteria-killing antibiotics. In the experiments that produced embryo-infesting biofilms, the scientists used DNA sequence comparisons to identify the bacterial species present.

The researchers learned low-oxygen conditions block autolysis, and that embryos prevented from autolyzing are quickly colonized by marine bacteria. Once inside, the bacteria form biofilms that fill the embryo cells. Sturdy cell membranes and the embryo's fertilization envelope provide the exterior cast. These biofilms formed detailed replicas of the embryos they had replaced.

The scientists also examined oxygen-starved embryos exposed to inoculums of oxygen-poor marine mud, and again found a high diversity of bacterial flora present in embryo replica biofilms, with species of the Bacteroidetes phylum being most common.

Although it is impossible to know whether bacteria aided the preservation of 550-million-year-old embryo fossils from Doushantuo and elsewhere, the Raffs argue the evidence they gathered strongly favors the view that bacteria are a fundamental force in fossil formation, as rapid biological processes must be available to convert highly delicate cells into a stable form and catalyse mineralization.

"This work is important because it helps us understand fossilization as a biological as well as geological process," Elizabeth Raff said. "It gives us a window onto the evolution of the embryos of the earth's first animals."

To speak with Elizabeth or Rudolf Raff, please contact David Bricker, University Communications, at 812-856-9035 or brickerd@indiana.edu. 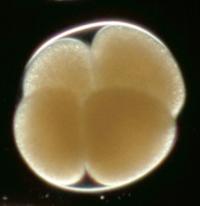