The Swainson's warbler (Limnothlypis swainsonii) is one of the rarest and most secretive songbirds in North America, prized by birdwatchers in the southeastern U.S. hoping to catch a glimpse of it in the wild or hear its beautiful ringing song. With only 90,000 breeding individuals sparsely distributed across 15 states in the U.S., the Swainson's warbler is a species of high conservation concern that, for decades, has left conservationists with little confidence that its populations would ever be fully secure.

However, new research published in the Oct. 30 edition of Bird Conservation International by Smithsonian's National Museum of Natural History scientist Gary Graves reveals that populations of Swainson's warbler are increasing in a surprising new habitat found mostly on private lands—pine plantations on nearly 16 million hectares on the coastal plain from eastern Texas to southeastern Virginia. The study compiles data from 20 years of field studies and suggests that if current trends continue, forests managed as short-rotation pine plantations will support the majority of Swainson's warbler breeding populations by the end of the 21st century.

"The Swainson's warbler is becoming a conservation success story in a habitat that was once feared to be a biological desert," said Graves, curator of birds in the Department of Vertebrate Zoology. "This is a prime example of how intensive management of forest lands for industrial purposes can have a direct impact on bird populations in a positive way."

The rarity of the Swainson's warbler has long been attributed to its finicky preference for large areas of densely vegetated breeding habitat in the southeastern U.S. and wintering range in the Caribbean basin. However, new research in the 1990s revealed that this warbler could be found in a surprisingly wide spectrum of habitats, including young loblolly pine plantations in eastern Texas. Graves believes that the common denominators of breeding habitats are dense understory vegetation, quite often impenetrable, and moist soils carpeted with leaf litter. In the case of short-rotation pine plantations in the southeastern U.S., there is a seven-to-eight–year window when the plantations are dense enough to support populations of Swainson's warbler. Once this period ends and the plantations thin out, Graves believes that the warblers will likely relocate to nearby younger plantations that exhibit the desired foliage density.

As part of its vast collections, the National Museum of Natural History stewards the type specimen of Swainson's warbler, the original specimen that John James Audubon used to describe the new species in 1834.

The Swainson's warbler is a small olive-brown bird with pale yellowish-white underparts that measures approximately 5.5 inches long. It uses its bill to forage on the forest floor, flipping leaves over and feeding on the insects living beneath them. This warbler is known for its loud, distinctive song and secretive behavior. Despite its small size, male Swainson's warblers defend large territories that range in size from 3 to 18 hectares.

Graves used playbacks of warbler songs to detect these reclusive birds during field surveys throughout the southeastern U.S. Future research will focus on the characteristics of pine stands and soils that promote the colonization of pine plantations by the Swainson's warbler. 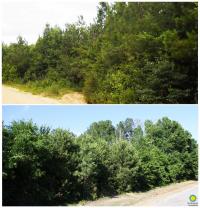