The Government of Bangladesh has announced that it will expand urea deep placement (UDP)—a technology that doubles the efficiency of urea fertilizer use—to almost 1 million hectares (ha) of rice land, reaching about 1.6 million farm families, in the coming boro or dry season.

UDP is the insertion of large urea briquettes into the rice root zone after transplanting. UDP cuts nitrogen losses significantly. Farmers who use UDP can increase yields by 25% while using less than 50% as much urea as before.

“Millions of rice farmers in Asia depend on urea fertilizer to meet the nitrogen needs of high-yielding rice varieties,” says Dr. Amit Roy, IFDC CEO. Most farmers, including those in Bangladesh, Vietnam, and Cambodia, broadcast urea into the floodwater.

But broadcasting is a highly inefficient application method because most of the nitrogen is lost to the air and water. Only one bag of urea in three is used by the plants.

Using UDP, Bangladesh’s dry season rice production is expected to increase by 548,000 tons, according to the Department of Agricultural Extension (DAE).

“Yields were comparatively good where urea was deep placed,” says Dr. C.S. Karim, Advisor, Bangladesh Ministry of Agriculture. “If we can save at least 20% of the urea by adopting UDP technology, we can supply a large part of the country’s demand from our own factories.”

UDP technology improves nitrogen use efficiency by keeping most of the urea nitrogen in the soil close to the rice roots and out of the floodwater, where it is more susceptible to loss as gaseous compounds or runoff.

The technology not only improves farmer income, but creates employment because of the need for the briquettes. Ten Bangladeshi manufacturers have produced and sold more than 2,000 briquette-making machines. The new UDP program will include the manufacture and establishment of some 300 briquetting machines to manufacture 2.7-gram briquettes.

UDP technology was introduced in Bangladesh in the late 1990s; by 2006 more than half a million farmers had adopted UDP. Average paddy yields had increased 20% to 25%, and income from paddy sales increased by 10%, while urea expenditures decreased 32%. Farmers who use UDP can reduce urea use by 78 to 150 kg/ha and increase paddy yields by 900 to 1,100 kg/ha. The net return to farmers of using UDP versus broadcasting urea averages $188/ha.

“I’m delighted that the Government of Bangladesh endorses the merit of this technology and has asked IFDC to be a part of the project,” Roy says.

Development of the UDP technology was funded by the U.S. Agency for International Development (USAID).

Funder
, Government of Bangladesh, US Agency for International Development 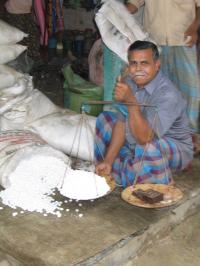