Eye drops developed by UBC researchers could one day treat glaucoma while you sleep - helping to heal a condition that is one of the leading causes of blindness around the world.

"Medicated eye drops are commonly used to treat glaucoma but they're often poorly absorbed. Less than five per cent of the drug stays in the eye because most of the drops just roll off the eye," said lead researcher Vikramaditya Yadav, a professor of chemical and biological engineering, and biomedical engineering at UBC.

"Even when the drug is absorbed, it may fail to reach the back of the eye, where it can start repairing damaged neurons and relieving the pressure that characterizes glaucoma."

To solve these problems, the UBC team developed a hydrogel that was then filled with thousands of nanoparticles containing cannabigerolic acid (CBGA), a cannabis compound that has shown promise in relieving glaucoma symptoms.

They applied the drops on donated pig corneas, which are similar to human corneas, and found that the drug was absorbed quickly and reached the back of the eye.

"You would apply the eye drops just before bedtime, and they would form a lens upon contact with the eye. The nanoparticles slowly dissolve during the night and penetrate the cornea. By morning, the lens will have completely dissolved," said Yadav.

Previous research shows that cannabinoids like CBGA are effective in relieving glaucoma symptoms, but no cannabis-based eye drops have so far been developed because cannabinoids don't easily dissolve in water, according to the researchers.

"By suspending CBGA in a nanoparticle-hydrogel composite, we have developed what we believe is the first cannabinoid-based eye drops that effectively penetrate through the eye to treat glaucoma. This composite could also potentially be used for other drugs designed to treat eye disorders like infections or macular degeneration," said study co-author Syed Haider Kamal, a research associate in Yadav's lab.

InMed Pharmaceuticals Inc., a drug discovery and development company that focuses on the therapeutic potential of cannabinoids, supported the research. 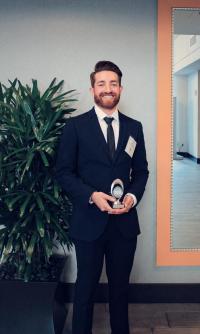