As the planet warms, one way for plants and animals to find their way to cooler territory is to move up higher into the mountains. Now, researchers reporting in the Cell Press journal Current Biology on April 25 have found that cherry trees are indeed making their way to the mountaintops with help from an unexpected source: mountain-climbing bears.

In the case of cherry trees, it's all about the bears.

If the goal is to seek cooler temperatures, then moving to higher altitudes is a rather useful strategy, the researchers explain. That's because the temperature change with increasing altitude is about 100 to 1,000 times greater than can be obtained by moving the same distance to the north or south.

The researchers spent 3 years, from 2010 to 2013, studying the movement of wild cherry tree seeds in the dung of Asiatic black bears and small mammals known as Japanese martens. The bears accounted for the bulk of seed movement by mammals, according to their study.

To determine how the seeds moved in space, the researchers relied on the ratio of stable oxygen isotopes in the seeds, which correspond to the temperatures in the place where the plant grew. Their studies show that bears often move seeds over several hundred meters, almost always toward the mountaintops.

"We show that bears disperse seeds toward mountaintops, probably because bears climb mountains following the spring plant phenology, proceeding from the foot to the top of mountains," Naoe says.

The dispersal distance of the seeds was considered to be sufficient for the cherries to cope with global warming. The distance that the bears and martens moved the seeds corresponded to a drop in temperature of about 1.0°C or 2.0°C, enough to offset the projected global temperature rise of almost 5°C by the year 2100.

While the findings come as good news for cherry trees, they are a reminder that the movement patterns of individual plants in nature will be hard to accurately predict without careful consideration of their complex interactions with seed-dispersing animals, the researchers say. Estimates suggest that more than one-third of plants depend on animals to disperse their seeds.

Naoe and colleagues will continue to explore the ability of various plants to travel up into the mountains by various routes, including birds, wind, and water. They suspect that the story won't be as hopeful for autumn-fruiting plants dispersed by mammals as they come down from the mountains.

"Seed dispersal toward the base of the mountain is a tragedy under global warming," Naoe says.

This work was funded by the Japan Society for the Promotion of Science and the Ministry of the Environment. The present study was conducted using Joint Usage/Research Grant of Center for Ecological Research, Kyoto University. 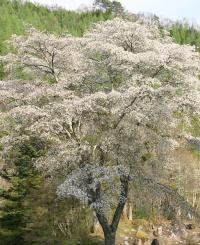