CORAL GABLES, Fla. (July 27, 2014) — When we look up to the heavens on a clear night, we see an immense dark sky with uncountable stars. With a small telescope we can also see galaxies, nebulae, and the disks of planets. If you look at the sky with an X-ray detector, you would see many of these same familiar objects; in addition, you would see the whole sky glowing brightly with X-rays. This glow is called the "diffuse X-ray background."

While, at higher energies, the diffuse emission is due to point sources too far away and faint to be seen individually, the origins of the soft X-ray glow have been controversial, even 50 years after it was first discovered. The long-standing debate centers around whether the soft X-ray emission comes from outside our solar system, from a hot bubble of gas called the local hot bubble, or whether the emission comes from within the solar system, due to the solar wind colliding with diffuse gas.

New findings settle this controversy. A recent study shows that the emission is dominated by the local hot bubble of gas (1 million degrees), with, at most, 40 percent of emission originating within the solar system. The findings, published in the journal Nature, should put to rest the disagreement about the origin of the X-ray emission and confirm the existence of the local hot bubble.

"We now know that the emission comes from both sources, but is dominated by the local hot bubble," said Massimiliano Galeazzi, professor and associate chair in the Department of Physics in the College of Arts and Sciences, at the University of Miami (UM) and principal investigator of the study. "This is a significant discovery. Specifically, the existence or nonexistence of the local bubble affects our understanding of the area of the galaxy close to the Sun, and can, therefore, be used as a foundation for future models of the galaxy structure."

Galeazzi, who led the investigation, and his collaborators from NASA, the University of Wisconsin-Madison, the University of Michigan, the University of Kansas, the Johns Hopkins University and CNRS in France, launched a sounding rocket mission to analyze the diffuse X-ray emission, with the goal of identifying how much of that emission comes from within our solar system and how much from the local hot bubble.

"The DXL team is an extraordinary example of cross-disciplinary science, bringing together astrophysicists, planetary scientists, and heliophysicists," said F. Scott Porter, astrophysicist at NASA's Goddard Space Flight Center. "It's unusual but very rewarding when scientists with such diverse interests come together to produce such groundbreaking results."

The study measured the diffuse X-ray emission at low energy, what is referred to as the 1/4 keV band, corresponding to radiation with wavelength of the order of 5 nm.

"At that low energy, the light gets absorbed by the neutral gas in our galaxy, so the fact that we observe it means that the source must be 'local,' possibly within a few hundred light-years from Earth. However, until now it was unclear whether it comes from within the solar system (within few astronomical units from Earth), or a very hot bubble of gas in the solar neighborhood (hundreds of light-years from Earth). This is like traveling at night and seeing a light, not knowing if the light comes from 10 yards or 1,000 miles away," Galeazzi said.

Interstellar bubbles are probably created by stellar winds and supernova explosions, which cast material outward, forming large cavities in the interstellar medium—the material that fills the space between the stars in a galaxy. Hot X-ray emitting gas can fill the bubble, if a second supernova occurs within the empty cavity.

X-ray emission also occurs within our solar system when the solar wind collides with interplanetary neutral gas. The solar wind is a stream of charged particles released, with great energy, from the atmosphere of the sun. They create a solar wind that travels vast distances, forming a region called the heliosphere. As these particles travel through space at supersonic speeds, they may collide with neutral hydrogen and helium that enters the solar system due to the motion of the sun in the galaxy, capturing an electron and emitting X-rays. This is called the solar wind charge exchange process.

The team refurbished and modernized an X-ray detector that was mounted on a sounding rocket. The X-ray detector was originally flown by the University of Wisconsin-Madison on multiple missions during the 1970s to map the soft X-ray sky. The current team, led by Galeazzi, rebuilt, tested, calibrated, and adapted the detectors to a modern NASA suborbital sounding rocket. Components from a 1993 Space Shuttle mission were also used. The sounding rocket mission, known as "The Diffuse X-ray emission from the Local Galaxy," aimed at separating and quantifying the X-ray emission from the two suspected sources: the local hot bubble and the solar wind charge exchange. This was the first mission designed for this kind of study.

"X-ray telescopes on satellites can observe for long periods of time and have reasonably large collecting areas, but very tiny fields of view, so they are very good for studying a small area in great detail," said Dan McCammon, professor of Physics at the University of Wisconsin-Madison and one of the scientists who built the original instrument. "However, the observations for this experiment needed to look at a large part of the sky in a short time, to make sure the Solar wind did not change during the measurements. The sounding rocket could do it 4000 times faster."

The rocket was launched with the support of NASA's Wallops Flight Facility, from White Sands Missile Range in New Mexico, on December 12, 2012. It reached an altitude of 258 km (160 miles), and stayed above the Earth's atmosphere for five minutes, enough time to carry out its mission successfully. The information collected was transmitted directly to researchers on the ground at the launch facility.

"The sounding rocket program allows us to conduct high-risk, high-payoff science quickly and inexpensively," Porter said. "It is really one of NASA's crown jewels."

Galeazzi and collaborators are already planning the next launch. The next mission will be similar in design and goals, but will have multiple instruments to characterize the emission in more detail. The launch is currently planned for December, 2015.

The study was made possible with support from NASA. In addition, the collaborators in France received support from: Soleil Héliosphère Magnétosphère" of the French space agency CNES, and the National Program "Physique Chimie du Milieu Interstellaire" of the Institut national des sciences de l'univers, INSU.

The University of Miami's mission is to educate and nurture students, to create knowledge, and to provide service to our community and beyond. Committed to excellence and proud of our diversity of our University family, we strive to develop future leaders of our nation and the world. 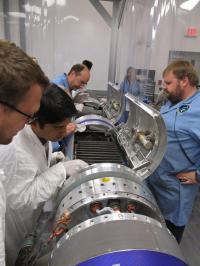 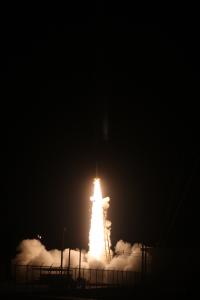