Over the last 30 years, 50% of the world's coral reefs have suffered significant damage due to climate change and acidification with the last three being the worst in reefs recent history. Major coral bleaching events, which transpire when water temperatures are too high, have occurred in the Pacific Ocean, the Caribbean and parts of the Red Sea.

Despite this, scientists at Bar-Ilan University and the Interuniversity Institute for Marine Science in Israel's southernmost city of Eilat have demonstrated in previous research that coral reefs in the north Red Sea and Gulf of Aqaba, unlike in other parts of the world, are resilient to climate change and acidification due to the history of the red sea since the last glacial maximum.

While this is encouraging, there is growing concern that local disturbances, such as excess nutrients from sewage, fish farms, and flash floods may pose a threat to the coral refuge in the Gulf of Aqaba, a narrow body of water with a relatively dense human population around it. To address this concern the Israeli scientists joined forces with researchers from the Mote Marine Laboratory in Florida and the University of Mississippi to determine how excess nutrients might negatively affect the coral reefs and reduce their resilience to climate change and acidification. Their results were just published in Marine Pollution Bulletin.

Using the Red Sea simulator, a system developed in Israel, the experimentalists altered the conditions in an 80-aquarium, high-tech facility at the Interuniversity Institute for Marine Science and monitored the effects on the coral reefs that are incubated there. They conducted a simulation of future conditions in the Red Sea caused by global warming and acidification, while simultaneously increasing levels of nutrients such as nitrate and phosphate.

When the corals were exposed to climate change and ocean acidification, like in previous research, the researchers saw that they remained extraordinarily resilient. However, when nitrate and phosphate were added, the coral thermal resilience was compromised while algal growth benefited from excess CO2 and nutrients. Algal dominance over corals in the reef means losing all of the beauty and biodiversity of the coral reefs.

"We added concentrations of nutrients that are ecologically relevant and we noticed that the physiological performance of the corals was compromised. Their resistance to thermal stress was much lower. Their ability to withstand global factors was lower. And we found that the entire microbial community on the coral surface changed," said Dr. Emily Hall, the lead author of the study from the Mote Marine Laboratory.

"We've shown that local disturbances sometimes compromise the ability of even the most resilient corals to withstand change. Therefore, it is crucial to remove these local disturbances, which also include oil pollution, sewage, coastal development, and other pollutants in order to secure the coral refuge," said Prof. Maoz Fine, of Bar-Ilan University's Mina and Everard Goodman Faculty of Life Sciences, who supervised the study. "Given the fact that Israel and her neighboring countries - Jordan, Egypt and Saudi Arabia -- plan to further develop the Gulf and Red Sea coastlines, these activities must be coordinated even though we are in a geopolitical situation that makes it difficult to do so. Coral reefs also contribute greatly to the world economy, so it's important that the cities of Eilat and Aqaba, Jordan -- which rely heavily on the tourism, biomedical, and diving industries - coordinate and act to preserve them."

Fine is currently conducting additional studies to examine what affect other local disturbances, such as heavy metals, oil pollution, and other pollutants in the Gulf, are having on the coral refuge. "As a small country there is little that Israel can do to reduce global carbon emissions that damage corals, but we can make a real impact by removing local disturbances. If current predictions about climate change continue, we need immediate protection," said Fine. 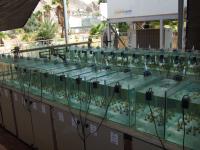