In BMJ Case Reports this week, doctors warn of the dangers posed by herbal remedies after a trained herbalist accidentally overdosed on the 'deadly nightshade' herbal medicine.

Atropa belladonna, also known as the deadly nightshade, is a poisonous plant that can be purchased legally. In herbal medicine, it is used to treat 'nervous pain' and muscle spasm, and to reduce secretions.

The 50-year-old patient drank a small amount of 50mL from the bottle to help her insomnia one evening. However, this was equivalent to a very large dose of 15mg of atropine -- a naturally occurring poison found in A. belladonna -- which produced almost fatal effects.

The patient was admitted to the emergency department with acute anticholinergic syndrome -- symptoms included confusion, flushes, a fast heart rate, and hypersensitivity. Due to severe agitation, she was sedated, and consequently admitted to intensive care overnight. She made a full recovery by the following morning.

The doctors who treated her write this episode provides an "important insight into potentially dangerous products available legally within the UK." They explain there is no mandatory training or registration for individuals practicing as a herbal practitioners, and minimal legal safeguards or specifications relating to the herbal remedy industry.

A young patient with severe iron deficiency may have developed the condition from chronic and heavy lice infestation, according to an article published in BMJ Case Reports.

Her medical history and laboratory investigation did not show any obvious condition as the underlying cause of her anaemia, for example, she was not malnourished, and her albumin level was normal. She had secondary amenorrhoea, that is the absence of normal periods. A physical examination revealed heavy and chronic head lice infestation, and scratch marks on her scalp.

The doctors note previous case reports of severe iron deficiency in patients who were homeless, with limited access to hygiene, which led to with chronic and heavy lice infestation. The present patient had poor hygiene due to depression.

Doctors gave the patient two units of packed red blood cells, and her haemoglobin level increased. She was provided with insect repellent, head lice shampoo and intravenous iron therapy for anaemia. She was discharged with oral iron and folic supplementation.

A BMJ Case Report describes the successful removal of a large accessory breast, also known as polymastia, from a 41-year-old woman in India.

An accessory breast is an additional breast, and affects approximately 2-6% of the female population. These can range from small moles to fully functional breasts, and symptoms can include pain, restriction in movement, cosmetic impairment, negative body image, psychosexual dysfunction, and stigma. Treatment is required if symptoms arise or the breast becomes cancerous.

The patient in this report had an accessory breast on her left hand side which increased in size over the course of 10 years following her first pregnancy. Upon admission to hospital, the breast had reached almost three times that of her right breast.

As a result of the condition, the patient became socially withdrawn and rarely went outside her home because she feared other people's reactions. She had negative body image and poor self esteem. She only sought medical treatment when she had pain in her left shoulder and arm.

A mastectomy was performed to remove the accessory breast, and the patient was happy with cosmetic surgery. She fully recovered from the surgery, and started going out and meeting other people again.

A young boy's right kidney was pierced by a hair pin that he swallowed, reports a BMJ Case Report that highlights the rare complications following the ingestion of foreign objects.

It is common for children to swallow small objects and these usually pass harmlessly through the gastrointestinal tract. Coins and bones are the most commonly ingested. Complications are rare, for example, in this case report of a young boy who swallowed a hair pin.

The boy had pain on his upper right abdomen and between his ribs and hip, and irregular fever and chills for three months. His parents sought medical advice, and he was diagnosed with a urinary tract infection (UTI). There was only minimal improvement after a course of antibiotics.

Following admission to another medical facility, an X-ray of the abdomen revealed the hair pin in the boy's right upper abdomen, and he admitted to swallowing the hair pin around one month before his symptoms started. His parents were reassured that this would pass through his system.

However, the boy's pains continued, and a CT scan revealed the hair pin had gone through to his right kidney. The doctors who treated the boy explain that the ends of the bobby pin had rusted and become sharp, and pierced through the first section of the small intestine and deep into his kidney. Surgery was performed to remove the hair pin, and the boy made a full recovery.

This week in BMJ Case Reports 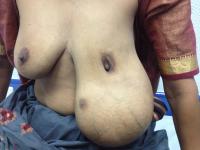