Plants that emit an airborne distress signal in response to herbivory may actually attract more enemies, according to a new study published in the open-access journal Frontiers in Plant Science .

A team of researchers from Switzerland found that the odor released by maize plants under attack by insects attract not only parasitic wasps, which prey on herbivorous insects, but also caterpillars of the Egyptian cotton leafworm moth Spodoptera littoralis, a species that feeds on maize leaves.

"Adult moths and butterflies avoid food plants that are under attack by conspecifics. This seems adaptive, because it reduces both competition and the risk of predation by parasitoids. But we found that S. littoralis caterpillars are actually attracted to the odor of damaged maize plants, even when this odor is mimicked in the laboratory with a mix of synthetic compounds," said Prof. Ted Turlings, an author of the study and head of the Laboratory for Fundamental and Applied Research in Chemical Ecology Institute of Biology at the University of Neuchâtel, Switzerland.

To determine what kind of odors the caterpillars preferred, the researchers let the caterpillars chose among several odors by placing them in an olfactometer, a device consisting of four tubes connected to a central chamber, with each tube introducing an airflow carrying a different odor. The caterpillars were more than twice as likely to crawl towards the odor from maize plants under attack by conspecifics than towards undamaged plants, especially if the damage was recent and the caterpillars had already fed on maize.

So what might be the advantage to the caterpillars of moving towards plants that are already infested? "When S. littoralis caterpillars drop from a plant they are highly vulnerable to predators and pathogens in the soil, as well as to starvation. The advantage seems to be that fallen caterpillars can quickly rediscover the plant on which they fed. The caterpillars feed less and move more when exposed to high concentrations of the volatiles. By moving away from freshly damaged sites, they can minimize risk of predation and avoid competition," explained Prof. Turling.

Turlings and colleagues propose that hungry S. littoralis caterpillars do the best of a bad job by moving towards volatile organic compounds released by damaged maize plants. On these plants the competition may be more intense, but at least the caterpillars are assured of a suitable plant. Adult moths, on the other hand, are much more mobile and take little risk exploring the environment to discover the best food source -- so they avoid maize that is already under attack.

Note to Editors: For online articles, please include a link to the study: http://www.frontiersin.org/Plant-Microbe_Interaction/10.3389/fpls.2013.00209/abstract

Frontiers is a community driven open-access publisher and research networking platform. Launched and run by scientists since 2007, and based in Switzerland, Frontiers empowers researchers to advance the way science is evaluated, communicated and shared in the digital era. Frontiers joined the Nature Publishing Group family in 2013.

The "Frontiers in" series of journals publish around 500 peer-reviewed articles every month, which receive 5 million monthly views and are supported by over 25,000 editors and reviewers around the world. Frontiers has formed partnerships with international organizations such as the Max Planck Society and the International Union of Immunological Societies (IUIS). For more information, please visit: http://www.frontiersin.org. 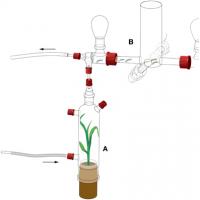 Detail of the 4-Arm Olfactometer Setup for <i>S. littoralis </i> Larval Behavior