Holographic atomic memory, invented and constructed by physicists from the Faculty of Physics at the University of Warsaw, is the first device able to generate single photons on demand in groups of several dozen or more. The device, successfully demonstrated in practice, overcomes one of the fundamental obstacles towards the construction of some type of quantum computer.

Completely secure, high-speed quantum communication, or even a model of quantum computer, may be among the possible applications for the new source of single photons recently built at the Faculty of Physics at the University of Warsaw (UW Physics), Poland. An unprecedented feature of this new device is that for the first time it enables the on-demand production of a precisely controlled group of photons, as opposed to just a single one.

"Compared to existing solutions and ideas, our device is much more efficient and allows for integration on a larger scale. In the functional sense, one can even think of it as a first equivalent of a small 'integrated circuit' operating on single photons", explains Dr. Wojciech Wasilewski (UW Physics), one of the authors of an article published in the renowned scientific journal Physical Review Letters.

The first single-photon sources were invented in the 1970s, and even though the many types of them that exist today still have their many drawbacks, single photons can nevertheless be successfully used in quantum communication protocols that guarantee full confidentiality. However, to be able to perform complex quantum computations we would need entire groups of photons.

The simplest method of generating groups of photons is to use a sufficiently large number of sources. The devices in widespread use today utilize the phenomenon of Spontaneous Parametric Down-Conversion (SPDC). Under certain conditions, a photon generated by a laser can split into two new ones, each with half the amount of energy, and with all other properties linked by the principles of conserving energy and momentum. Thus, when we record information on one of the photon from the pair we also find out about the existence and properties of the other photon, which nevertheless remains undisturbed by observation and therefore perfectly suitable for quantum operations. Unfortunately, every SPDC source generates single photons rather slowly and quite randomly. As a result, for a simultaneous emission from even as few as 10 sources we might have to wait up for several years.

In 2013 a team of physicists from the Universities of Oxford and London proposed a much more efficient protocol for generating groups of photons. The idea was to place a quantum memory at each source, which would be capable of storing emitted photons. The photons stored in the memories could be released at the same moment. Calculations showed that the time scale required to wait for a group of 10 photons would then be shortened by a whopping ten orders of magnitude: from years down to microseconds!

The source now unveiled by the University of Warsaw physicists represents the first implementation of this concept, and one that's much more integrated: here, all the photons are created immediately within the quantum memory as a result of the laser pulse, which lasts only microseconds. External sources of single photons are no longer needed at all, and the necessary number of quantum memories has dwindled to just one.

"Our entire experimental setup takes up about two square meters of our optical table surface. But the most important events take place in the memory itself, in a glass cylinder measuring approximately 10 cm in length and with a diameter of 2.5 cm. Anyone who might expect to see inside the cylinder a sophisticated design worthy of a semiconductor integrated circuit will be greatly disappointed: the interior of a cell is filled only with pairs of rubidium atoms 87Rb at 60-80 degrees Celsius", describes Michal Dabrowski, a PhD student at UW Physics.

The new memory, which was built with the support of PRELUDIUM and SONATA grants from Poland's National Science Centre and the resources of the PhoQuS@UW project is a spatially multimode memory: individual photons can be placed, stored, processed and read in different areas inside the cylinder, acting as separate memory drawers. The write operation, performed with a laser beam, works by preserving a certain spatial model, a hologram, in the form of atomic excitations. Illuminating the system with the laser allows us to reconstruct the hologram and read the memory's content.

In the conducted experiments the new source generated a group of up to 60 photons. Calculations show that in realistic conditions, the use of higher power lasers would help to increase this number even up to several thousand. (The calculations involved in the data analysis from this experiment were of such great complexity that they required the computing power of 53,000 grid cores of the PL-Grid Infrastructure).

Due to noise, losses and other parasitic processes, the quantum memory from UW Physics can store photons from several to tens of microseconds, which for humans can seem like a very short time. However, there are systems allowing for simple operations to be performed on photons in nanoseconds. In the new quantum memory we can in principle perform several hundred operations on each photon, which is sufficient for quantum communication and information processing.

Having such a working source of large groups of photons brings us an important step closer to constructing one type of a quantum computer, able to perform certain calculations in much less time than the best modern computing machines. Several years ago it was shown that by performing simple linear optics operations on photons we can increase the speed of quantum computing. The complexity of these computations depends on the number of photons processed simultaneously. However, the limitations of the sources of large groups of photons prevented linear quantum computers from spreading their wings, keeping them limited to elementary mathematical operations.

In addition to quantum computations, the photonic 'integrated circuit' may be useful in quantum communication. Currently, this involves sending single photons using an optical fibre. The new source would allow many photons to enter the optical fibre simultaneously, and therefore would increase the capacity of quantum channels.

FUW170208b_fot01s.jpg
HR: http://www.fuw.edu.pl/press/images/2017/FUW170208b_fot01.jpg
The heart of the system to generate groups of photons is a glass cell filled with hot gas vapour. Illuminating the cell with a laser results in the emission of photons with a wavelength in the infrared spectrum range. (Source: UW Physics, Mateusz Mazelanik)

FUW170208b_fot02s.jpg
HR: http://www.fuw.edu.pl/press/images/2017/FUW170208b_fot02.jpg
Wojciech Wasilewski (left) and Michal Dabrowski from the Faculty of Physics at the University of Warsaw demonstrate the single photon generator based on holographic quantum memory. Here, the gas-filled glass cell is located inside the magnetic shield used to eliminate external disturbances. (Source: UW Physics, Mateusz Mazelanik 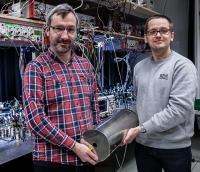