LAWRENCE -- A team of investigators from the University of Kansas currently is stationed at Antarctica's Shackleton Glacier to collect the remains of plants that once thrived there during the boundary between the Permian and Triassic periods.

The fieldwork, supported by a new National Science Foundation grant secured in cooperation with researchers at the University of Wisconsin-Milwaukee, will continue through mid-January.

"The Shackleton Glacier is an ideal logistical point to operate from," said Rudolph (Rudy) Serbet, collections manager in paleobotany at KU's Biodiversity Institute and Natural History Museum, who is leading the field team. "The surrounding mountains are made up of terrestrial deposits, and these kinds of features are typically rich in plant remains."

The team, including KU postdoctoral researcher Brian Atkinson and Patricia Ryberg from Park University (a KU alumna in paleobotany), will survey the area to determine where plant material might be found. They'll look to collect fossil plants, fossil wood, stratigraphic, sedimentologic, paleosol and geochemical data from plants and the rocks that contain them to reconstruct the extent of the Gondwana glaciation in the Shackleton Glacier.

"Usually the color of a rock layer can indicate the presence of fossils -- a darker carbon layer," Serbet said. "Sometimes, however, we have to sample a number of areas to find a site to excavate. In some cases, the material is on the surface and we just have to pick it up and bag it."

The primary investigator for the NSF grant, Edith Taylor, professor emerita of ecology & evolutionary biology, said fossil plants that lived during the Permian and Triassic could foretell how plants will respond to contemporary climate change.

"By the Triassic, there was a big greenhouse effect -- it was second only to the Cretaceous in terms of being very warm," she said. "These plants were growing at very high latitudes. Plants would need adaptations. They'd have to drop their leaves during the long winter. They'd use their reserves because they'd have no more food. It's important today because our world is rapidly warming, and flora and fauna are moving into warmer areas. For instance, in the Antarctic peninsula -- which has two species of land plants today -- the populations are rapidly expanding because it's getting so much warmer. You could speculate plants from South America will soon be in Antarctica. If we want to see how plants would survive, we look into the past."

Taylor said that fossilized plants from millions of years ago are difficult to find, but it's easier to obtain petrified plants in Antarctica.

"Fossilization is really rare because a plant has to fall into a body of water and be covered by sediments," she said. "Part of the reason we go to Antarctica is the number of plants that are petrified. Their tissue is infiltrated by minerals and turned to stone. Then all the cells are preserved -- you can study the anatomy of the plants. You can learn something about the physiology and learn how the plant lived. Tree rings are a good example. Was it a favorable environment the plant lived in? There are quite a few petrified plants in Antarctica because there were a lot of volcanic rocks and a lot of silica in groundwater that got into the plants -- so lots of example of petrified fossils."

A previous fieldwork trip to the Shackleton Glacier was spoiled by harsh weather that made fieldwork difficult.

"The weather is always a factor," Serbet said. "Our last season was stymied by high winds and fog. The nice thing about establishing a remote field camp is that when the weather grounds the planes and helicopters you can still go out around the camp and collect data, within the confines of being safe."

With a more successful collection mission this season, the researchers hope they can better reconstruct Permian-Triassic plant communities and their paleoenvironments and uncover specifics of Antarctica's complex late Paleozoic and Mesozoic environmental, climatic and biotic history.

"Although we know the overall picture of the area, it is the finer details that we are trying to fill in," Serbet said. "The area is significant because information within the sequence of rock layers leading up to the mass Permian extinction and into the recovery period is preserved. Part of our research is to gather evidence -- such as fossil plants -- to determine what types of changes may have occurred up to the extinction and into the recovery period."

The chronology of these changes includes glaciation and deglaciation; development and evolution of a post-glacial landscape and biota; environmental and biotic change associated with the end-Permian mass extinction events; the earliest ecosystems in the Triassic; greenhouse conditions in the Triassic; full recovery of floras and ecosystems by the Late Triassic; and, through all of these events, development and changes in a foreland basin system.

The KU investigators said the work should provide the framework to trace floral diversity and environmental evolution after the retreat of glaciers through to the Late Triassic.

What's more, the team hopes to share their findings beyond the world of academics, reaching the public-at-large through museum exhibits and activities as well as classrooms.

"At the Paleobotany Division at the Biodiversity Institute, we love public outreach," Taylor said. "Fossils are fun -- people can touch them and see them, and we know kids are fascinated by Antarctica. We do a couple of workshops with the TRIO Program and KU School of Education. We teach them about rocks, fossil plants and Antarctica. We bring a set of the clothing we wear for Antarctic fieldwork. We've done workshops at Emporia State University for middle-school girls from all over Kansas." 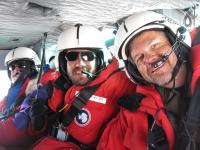